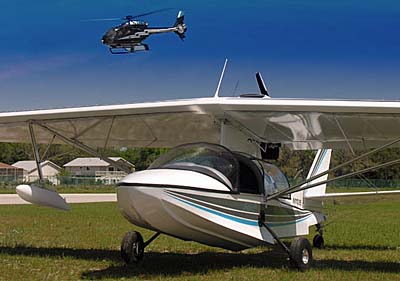 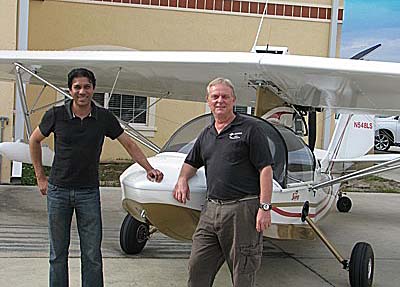 Abid Farooqui (L), consulted Progress Aerodyne on FAA and CAAC approvals. Kerry Richter is the originator and lead designer of the Searey. 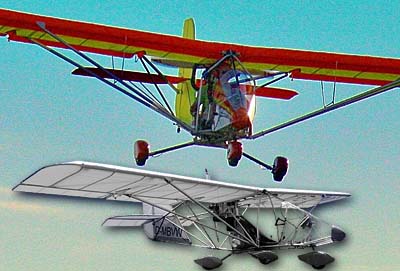 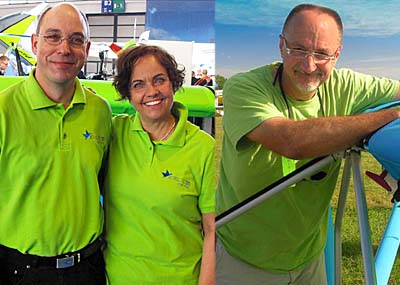 Vierkwerk Aviation is operated by Wolfgang and Thilda Labudde. They are supplied by Aerolite 103 manufacturer Dennis Carley.

Wait! “…Exports?” I realize that might look like a typo. Did I intend to write LSA imports? Nope, exports is the correct word. Back in the early days of Light-Sport Aircraft, circa 2005-6-7, the source countries manufacturing the LSA people were buying were of a high percentage European with the Czech Republic leading the charge. Their penetration of the market was approximately two-thirds of all LSA. Then came the global economic recession, which happened as the industry began to mature. All were affected: domestic and international companies and pilot consumers. Some handsome imported aircraft never found a market.

In any downturn, some managers adapt quicker to the changing economy. They find a way to offer new aircraft to keep the momentum. Neither were American companies sitting on their thumbs. European builders had a head start because the European-style ultralights they had been manufacturing were close to what FAA allowed as LSA, so many models could be rapidly adapted to meet the Yankee marketplace. American producers, who had previously been relegated to supplying kit airplanes, realized that making fully-built, FAA-accepted models was an entirely different business model. It took time to change gears.

Now, we leap forward a decade to find the landscape has changed significantly.

So with pleasure I can now describe two approvals that further alter the landscape. One is an American LSA that has earned Chinese CAAC approval. Another is a U.S. Part 103 ultralight adapted to the German 120-Class that recently won its credential.

SilverLight Aviation, operated by Abid Farooqui (photo) has been consulting to Progressive Aerodyne, developer and manufacturer of the Searey amphibian. Abid aided the Tavares, Florida company in achieving one of the cleanest FAA audits yet of a Light-Sport Aircraft company. High ranked FAA officials publicly called out the Searey audit as a positive example. SilverLight recently said, “Through [our] engineering consulting with Progressive, we helped the Searey LSA get Type Design Approval (TDA) with the Chinese Civil Aviation Council (CAAC).” Abid added, “Searey will be the first U.S. Light-Sport Aircraft company to get this type design approval under [China regulations].” SilverLight led and guided all the technical aspects of design assurance system, aircraft structural engineering, airworthiness management, flight testing and technical documentation including defending their work in front of CAAC certification team.

Progressive Aerodyne, owned by Adam Yang, established an office in China in July of this year. Other companies gaining approval in China include Flight Design and Evektor. My LAMA counterpart in Europe, Jan Fridrich, has provided material for articles on China’s emerging market for light aircraft in November last year and another from two years ago that also features several China-made LSA type aircraft. Abid offered, “Congratulations to Searey to become the first American LSA to get this honor.” CAAC’s certification team was led by the Deputy Director of agency’s Bejing Office.”

Ultralights, that is, true American ultralights having only one seat and weighing only 254 pounds empty have not been exports, historically. European ultralights, sometimes called microlights, are usually two seaters weighing somewhat less than American LSA; they are not the same as FAA’s preferred designation, “Ultralight Vehicles.”

With a simple regulation (written on the front and back of a single sheet of paper!), American ultralights have been permitted since 1982. No pilot license is needed nor is a pilot’s medical and no FAA registration or N-numbers are required. A Part 103 ultralight vehicle — so named deliberately to not run afoul of FAA’s “airplane” definition that might trigger more rules — can be fully built and sold ready to fly. For 32 years, this rule has stood as a remarkable bit of freedom allowed American aviators.

Europe also has a strong contingent of lightweight aircraft enthusiasts. England had its Sub-70 Class (under 70 kilos or 154 pounds) and much of Europe continues to have an interest in weight shift aircraft that tend to be lighter and less costly than most LSA. However, in recent years, UK has offered its SSDR (Single Seat DeRegulated) category and Germany introduced its 120-Class (120 kilos or 164 pounds). Both can work for an American ultralight like the Aerolite 103 built today by Deland Florida’s U-Fly-It. Read more about the new classes.

However, just because a government allows light aircraft to suffer less regulatory burden, European nations aren’t quite as progressive about letting go of the reins as was FAA back in ’82. In Germany the Aerolite dealer, Vierkwerk Aviation, had to go to significant effort and time to gain approval under the 120-Class category. At Aero this year, the company debuted the Aerolite 120 and announced they were pursuing acceptance. Just a few days, ago Vierwerk announced German approval, “Aerolite 120 was certified on November 20, 2014 as the legal European version. It may be flown as a deregulated single seat aircraft at 120 kilograms MTOW.”

My congratulations to Progressive Aerodyne, assisted by SilverLight Aviation and to Vierwerk and U-Fly-It for these approvals in China and Germany.