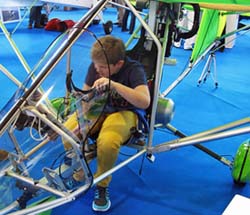 Younger pilots can actually think about owning an aircraft when it is priced as agreeably as Aerolite 103 or 120. 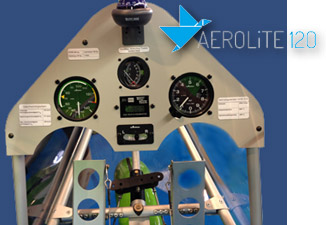 You can read my pilot report on Aerolite 103. While written in 1997, most information remains valid though improvements have been made. 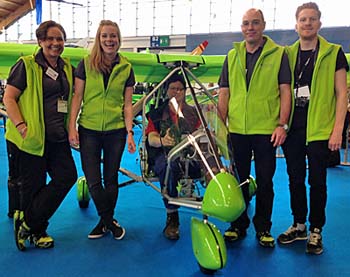 The Lubudde family posed in front of the Aerolite 120, complete with color coordinated airshow garb … even their shoes match the plane’s brilliant color.

It depended on whom you asked. As in the United States some were skeptical at Aero. “Oh, this will go nowhere.” “No one is interested” “We tried this and it didn’t work.” Maybe these naysayers are right, but the activity at one booth (or “stand” as they prefer in Europe) seemed to powerfully counteract that doubt. The stand was the Hirth exhibit which featured a variety of aircraft using the German powerplant. The one and only American aircraft example in the Hirth exhibit — indeed, perhaps the only light aircraft at Aero that was Made in the USA — was the Aerolite 103, or as it has been renamed here, Aerolite 120. Why the different name and why the strong interest? To clarify, by strong I mean an airplane sometimes so surrounded by attendees that you could not even get close. As further proof, Aerolite 120 was written up by several publications during the four days of Aero and also garnered television coverage. It took until the last day to photograph Aerolite 120 when I could see the airplane and not simply the backsides of those thronged around the light aircraft.

American know the Aerolite 103 for many years. As we found in a Sun ‘n Fun 2014 video to be posted when editing is completed, somewhere around 400 Aerolite 103s have been sold. During periods of time after designer Terry Raber created this simple yet complete machine, the company was operated by persons other than Terry and record keeping was not the focus. Documented sales are around 200 but easily twice that many were delivered to customers, nearly every one of them fully built as such is allowed under U.S. FAR Part 103 rules — the entire language of which can be printed on the front and back of a single page of office paper … itself a remarkable fact in a world of heavy regulation. Manufactured today by U-Fly-It based in Deland, Florida, proprietor Dennis Carley is fairly new as owner. He bought the company from Raber in late 2012 and brought all the inventory and tooling to Florida in January 2013. In that first year he reported 20 sales … not a bad achievement for a re-startup. At Sun ‘n Fun 2014 he said he already had eight sales in 2014 and he thought big things might be ahead as he had recently engaged a dealer in Europe. That was the Vierwerk company, the subject of this update.

Vierwerk is a family affair, run by Wolfgang Labudde and wife Thilda along with their son and daughter (photo). Wolfgang put in four years with Remos back when and therefore comes to the table with experience and his eyes wide open. The aircraft will sell for around 25,000 euros (somewhat more than $30,000; more on that below). It is less costly in the USA but in Germany, the Labuddes have to spend considerable funds to gain approval. A new 120 (kilogram) Class was proposed by the German government more than a year ago and Wolfgang and team must make a few engineered changes and then seek approval, a process handled in the country by organizations DULV and DAEC, private aeroclub operations sanctioned by the authorities to regulate light aircaft. This arrangement benefits companies and their customers by greatly reducing the regulatory burden but you still have to prove the machine quite thoroughly. Already Wolfgang and his group have improved in the instrument panel (photo) and installed German Winter instruments. He also upgraded the fuel lines and improved electrics with more robust connections and switches located in places where they will not interfere with normal operations. Officials also require rudder limit stops that are not present on U.S. models. All these and more changes followed by testing — to include calculated wing loads and physical testing — explain the higher price in Europe. Let me repeat: €25,000 is the retail fly-away price including VAT (value added tax) that is much higher than U.S. sales tax. This very affordable cost — and the charm of this simple yet well equipped aircraft — explain the strong interest the Labudde family saw at Aero 2014.

Team Aerolite 120 stated, “For the first time the Aerolite 120 is available to the European market as a deregulated Microlight Aircraft in the 120 kg category.” The new category and its potential is what produced the comments at the start of this article. Yet it also represents real promise. If aviation is serious about engaging new pilots, aircraft that cost hundreds of thousands of dollars or euros is not how it will likely happen. In the USA, we have Part 103 since 1982, and that program has never been overloaded with additional regulation, partly as it has proven adequate. Safety of such light aircraft is good even though some will say that’s because not many are flying. Perhaps, but they do exist and I point to the success of Aerolite 103 in the U.S. as evidence that this is not an invisible segment. So Europe is embracing their 120 Class (264 pounds empty) and England has its SSDR classification, with the letters standing for Single Seat De Regulated. I love the Aerolite 103. I’ve flown it on several occasions and find it a delightful flying machine that has no evil qualities and largely flies exactly as you’d expect. I wish Dennis Carley and the Labudde family great success but I think I’m late saying so. It appears success has already found them and that puts a smile on my face and those who contemplate finally being able to afford an aircraft to call their own.