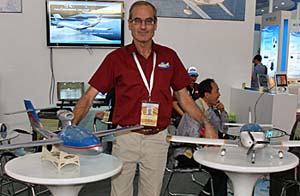 Chip Erwin of Czech Aircraft Works fame is now operating in China as Triton. We’ll have more on his new enterprise in a future SPLOG post.

Recognize these? Triton is building the Mermaid amphibian and the SC3D follow-on to the SportCruiser Chip Erwin’s team originally created.

Another familiar look is the Van’s RV-12. Van’s aircraft operate in many countries.

SeaRey, recently SLSA approved in the USA, has been working on entering China for several years.

“Nine Eagles” … is a “multifunctional motor glider” by Shanghai Nine Eagles Electronic Technology Co Ltd. The company is widely known for radio-controlled models and has recently become an agent for aircraft such as the Ibis Magic and Rotorway A600 Talon. This seems to be its first indigenous product, but it is saying nothing more. Update from Paul Jackson of Jane’s All the World’s Aircraft.

This handsome cantilever high wing is the Rui Xiang fuel cell research aircraft designed by Shenyang Aerospace University on behalf of Research Institute of Liaoning General Aviation Policy and Technical Advisory Services. It has one 30 kW (40 hp) Sineton A37k154 electric motor with 7.5 kWh lithium fuel cell. Gross weight is 1,056 pounds; span 47 feet; max level speed 82 knots. It is uncertain if RX1E has flown and no known plans for marketing have been announced. It seems to share tail unit with LN-60F UAV from same source. genous product, but it is saying nothing more. Update from Paul Jackson of Jane’s All the World’s Aircraft.

The Sunward Aurora was created by Hunan Sunward Science and Technology; it is essentially an Italian Fly Synthesis Texan. The prototype shown in 2008 is now in production, with at least four built and registered. Built with full collaboration of Fly Synthesis, who flew one in Italy and then shipped it to China for trials (still with its Italian registration in the cockpit). Update from Paul Jackson of Jane’s All the World’s Aircraft.

Back to one we know, this is Brazil’s SeaMax amphibian.

The Spanish Colyaer Freedom amphibian has been seen in American and the company may appear at Sun ‘n Fun 2013. 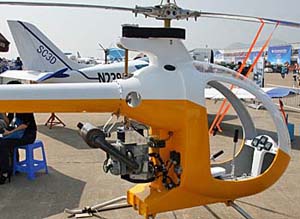 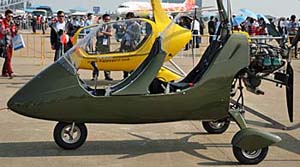 The yellow one reads “HappyGyro” but these appear to be the Auto Gyro Calidus and MTO Sport. 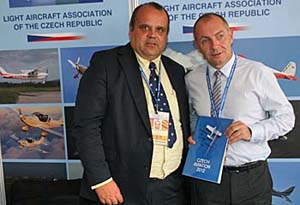 Last month the southern China city of Zhuhai hosted a large collection of aircraft at Airshow China. We’ve been hearing about this once-closed country in matters of aviation so often, I thought it would be something different to show a collection of photos taken by my LAMA Europe colleague, Jan Fridrich. He works for the Czech Light Aircraft Association and you know his name as the man who does the hard work to gather figures for our regular LSA market surveys.

Another associate of mine, Will Escutia, one of the new owners of Quicksilver Aeronautics, also traveled to China recently. Visiting dealer prospects in the north of the large country Will reported that he sees four main forces driving the opening of aviation in China: (1) airspace below 3,000 meters is opening to civilian aircraft; (2) high interest in flying follows that airspace opening; (3) government is concerned about their economy and aviation is seen as helpful; (4) entrepreneurs are jockeying to take early advantage of the burgeoning market.

Will observed the limitations to growth as bureaucracy and regulations that stifle faster development; the need for a Type Certificate with costs that are still too high; a need for a commercial pilots license; laws that hold a pilot responsible for any death, a deterrent to wealthy Chinese; and flying between cities remains prohibited so pilots can fly only about 60 kilometers around airports and you need to land where you took off.

As he is not fluent in Chinese, Jan was not able to determine the brands of all aircraft but it’s still fun to see what showed at Zhuhai. Some you’ll recognize and captions will name aircraft that could be identified. Thanks to Jan Fridrich for all these photos!