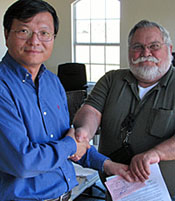 Progressive Aerodyne’s certification team celebrates winning SLSA certificate #129. Designer Kerry Ritcher stands to the left and company owner Adam Yang to the right of the SeaRey. General Manager Joe Friend is to the left of Kerry and Consultant Abid Farooqui is in the green shirt. (Also see update) 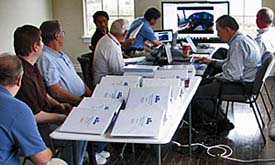 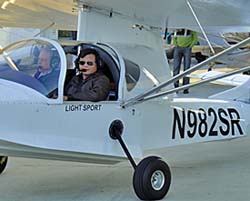 Consider this an entry to the “They-said-it-couldn’t-be-done” department. As regular readers know, FAA has been conducting audits with LSA producers… tough, top-to-bottom reviews of every detail in the voluminous ASTM standard set. Last April another company had no less than six FAA personnel in their building for three full days, each armed with a laptop and literally hundreds of questions. Passing one of these grueling tests is a fairly major accomplishment. Then consider FAA amped up the task by saying any new model or first LSA from a new company would probably get one of these thorough inspections before they could enter the market. Progressive Aerodyne hosted such an FAA team to examine their first SLSA candidate and — surprise! — they came out with a certificate. No followup is needed.

So the heartiest of congratulations go to Progressive Aerodyne and their SeaRey. Yesterday they were issued their airworthiness certificate after a visit from five FAA personnel from both Washington, DC and the local Orlando, Florida MIDO (Manufacturing Inspection District Office). After working with another consulting company for more than a year, Progressive Aerodyne CEO Adam Yang switched gears and hired Abid Farooqui of SilverLight Aviation. In four and a half months SilverLight’s staff worked with the Progressive Aerodyne certification team (see update) to complete the job on what was by any measure a very demanding schedule. The independent engineering company coordinated closely with Progressive Aerodyne’s staff lead by SeaRey designer, company president, and co-founder, Kerry Richter.

“[We] will start production of the compliant airplane immediately to meet the long expected market desire,” said Yang. [After] selling the same model kit of the two-place amphibian airplane for the past twenty years [our team] has been working diligently for a few years to meet relevant ASTM standards and FAA regulations.” He added that the internal group and its consultant strictly followed the ASTM standards and FAA regulations in achieving this “first-article” certificate with only minor findings that were corrected quickly resulting in the MIDO office issuing the coveted pink card.

With the arrival of SLSA #129, Progressive Aerodyne has proven that even with intensely watchful oversight from FAA officials, it remains possible for the Light-Sport Aircraft industry to maintain the blistering pace of new model development. The Tavares, Florida company headquartered appropriately on a lake will now make the transition from building the side-by-side seaplane kit to adding fully manufactured aircraft. This is no small task as the business model for kit assembly and builder support is radically different from constructing ready-to-fly airplanes to a series of internationally-recognized standards.

SeaRey is a popular seaplane with 600 kits sold and more than 500 flying. Owners make a loyal and tight group dedicated to their flying machines. The aircraft features a roomy cockpit with sliding canopy and full dual controls. It is powered by the Rotax 912 ULS and offers retractable gear in keeping with Light-Sport Aircraft rules for amphibians. You can read our full-length pilot report on the kit version.