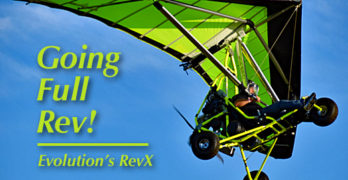 Evolution Trikes celebrated their 10th anniversary at Sun ‘n Fun 2019. That show and this company have enjoyed a long relationship, one meaningful enough that the two principals, Larry Mednick and Amy Saunders, exchanged their wedding vows at Sun ‘n Fun 2018 with show boss John “Lites” Leenhouts conducting the ceremony. Now, that’s commitment (to each other and to the big spring airshow).
Larry Mednick is a happily married man now but he remains a restless designer, always striving for a new variation on the exquisite theme he started with Revo ten years ago.
Since the ultra-deluxe Revo was introduced a decade back it has set a new benchmark for being the best-equipped, most-customized construction, with carefully-designed wings. The weight shift market enjoys several quality brands (though we did lose P&M earlier this year) and some are more affordable but none more sophisticated then Revo.
However, that level of engineering and manufacturing costs money and all the many Revo features and appointments add to its expense. 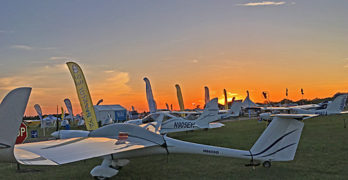 Videoman Dave and I never left Paradise City’s exhibits in our first day of video interviews. Yet we found several airplanes worth reviewing that fit comfortably into the affordable aviation space this website reports.
Hawk Ultra — Despite some speculative rumors, all is well with the dual CGS Hawk project involving two-seat Hawk specialist and primary components fabricator Terry Short paired with the father and son team of Bob and LB Santom handling the single place Hawk 103, Hawk Ultra and Hawk Plus.
Hawks developed a strong following in the U.S. and several countries with more than 2,000 flying. As the design emerged in 1983, it was only single place. Once Part 103 aircraft were growing and need for a two-seat trainer became apparent, the Hawk Arrow series debuted in several variations. With one or two seats, Hawks won a place in the hearts of many aviators and that continues unabated to this day. 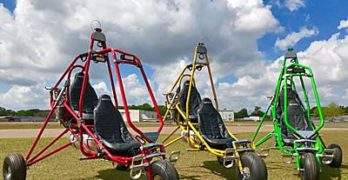 The newest SLSA on our List is a weight-shift control aircraft from Evolution Trikes, the folks who put the trike world on a pedestal with their remarkably deluxe and superbly finished Revo (see our Video Pilot Report of Revo and Part 2).
Following that BMW of trikes (Revo) Evolution released Rev, a Part 103-capable single seat trike.
A year ago, the company debuted a new model, called Revolt.
In less than a year, this model went from pre-flying debut to a fully ASTM-compliant aircraft.
Evolution, lead by Larry Mednick, started ASTM work in June 2017. Testing was completed by December 15, 2017 and they felt ready for an FAA inspector but it took time to arrange a visit from an agency.
In the case of any new model, FAA in Washington, DC can choose to require an official, full-blown audit, meaning three or four full days’ work by three or four FAA staffers.

The people behind the very impressive two seat deluxe trike called Revo introduced their first single seater called Rev. In this video, the first of a two part effort, we see developer Larry Mednick and his father Phil assemble the airplane from trailerable form to ready to fly in a claimed six minutes; you can watch and time for your self to see how transformative this is. Then see Part 2 for more details. 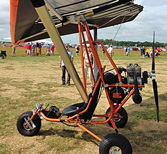 If you saw Part 1 on the Evolution Trikes Rev, you saw it assembled from trailer form to flight form in a few minutes. In this video, main developer Larry Mednick tells us more about his slick new single seater that sells for a mere $17,900 (base price, though many options can be added). Rev can make Part 103 in its basic form when equipped with a parachute, which it was. Get the whole scoop here.

Come on along as we fly the most deluxe trike you can buy. This is the Evolution Trikes Revo and it is really something. Aloft with designer and trike pilot extraordinare, Larry Mednick, he offers instruction — as we prefer so you experience what it might be like to fly an aircraft you may never have flown. “Trike” is a generic abbreviation for weight shift aircraft. This one is a Special LSA version and it can blaze along faster than 100 mph. Don’t believe that? Join us as we prove the point. TRT: 29 minutes (Part 1 of 2) 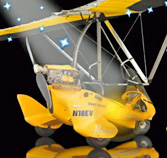 We have looked at the Revo trike before and I’ve come to love this handsome hotrod weight shift LSA. Yet developer Larry Mednick keeps on changing this aircraft, so much so that we have to keep taking another look. At Sebring 2013, we spoke with Larry to hear about the newest refinements to this deluxe rig that may be the most evolved trike in the world (not to say some others aren’t great, but few update and upgrade as often as Evolution).

Among many of the world’s deluxe trikes, Evolution Trikes’ Revo rises to the top of the stack. The all-American-made hot rod is loaded with custom-designed features that should attract the closest examination. Revo also performs like a winner with blazing top speed yet reassuring landing approach speeds. The sophisticated carriage handles rough fields with ease.