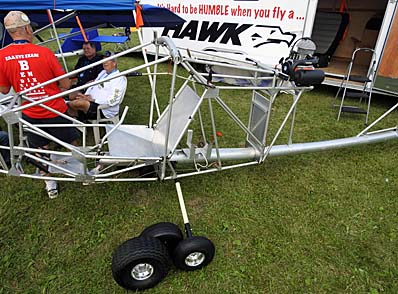 …line on the trailer: “It’s hard to be humble when you fly a Hawk.”

CGS Hawk is one of our most storied brands of ultralight and light aircraft. Built in one and two seat varieties in several variations for 35 years, more than 2,000 are flying. Hawk has proven a significant contributor to the light aircraft fleet. Lots of owners I’ve spoken to simply love their Hawk.

After many years of production by the company named after its founder Chuck Slusarczyk — the “C” in CGS — the well known brand is now on its third …and fourth, owners. It’s all good, though. Let me explain.

Current brand owner is Terry Short (article). He will remain key to the manufacture of these aircraft but in fall 2017, he struck an agreement with a new group.

At AirVenture 2018 I met and interviewed Bob Santom and his son, LB. Another son is also involved making the enterprise a family affair. Preparing for our video recording, I learned about their plans. 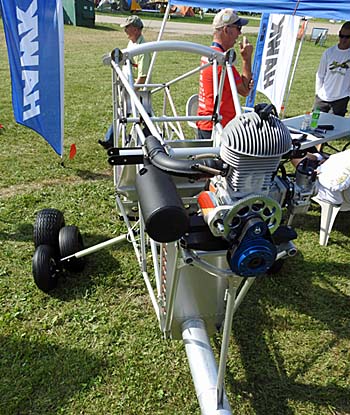 The Santoms will take over production and sales of the single place Hawk models including the Part 103 model and the Ultra, a somewhat beefier model that is built as an Experimental Amateur Built (EAB). My discussion with Bob and LB was encouraging. I was impressed to hear the enthusiasm from father and son for keeping this series of Hawks available.

This will make it easy on both enterprises as the Santoms will lean on Terry’s fabrication abilities as they use many parts that are interchangeable between the single and two-seat models of Hawk.

“We talked to many Hawk enthusiasts at recent shows and we were pleased to hear of genuine interest in the single place models,” Bob added.

As you can see by the bare bones Hawk they exhibited, the new operation is just getting underway so a new website is not yet available but you can can email for more info.