Some kind of remarkable thing happened here in Mt. Vernon, Illinois where the Midwest LSA Expo is taking place. Out of the 30 or 40 airplanes on display, no less than three of them are what I’ll call “next generation” Part 103 ultralight entries.

It would be amazing to see three new ones of any sort, but all three of these are modern. They all use contemporary materials yet they have all been shown to qualify for FAA’s simplest regulation.

The three are Chip Erwin’s Merlin Lite, the AVI Swan I wrote about yesterday, and today’s subject: AeroplanesDAR’s Solo. All three are impressive and all three break away from the common Part 103 ultralight using “tube and gusset” construction

Two years ago I reported on the Merlin Lite and the pace of its innovative development has quickened. Chip’s popular entry will soon enter into a new production agreement so the airplanes will be assembled here in the USA by a longtime reliable expert. I’ll have more on that when the operation begins.

AeroplanesDAR is a ultralight airplane manufacturer based in Sofia, Bulgaria (a few hundred miles straight north of Athens, Greece) for almost two decades. The company is “older than Boeing,” but in 1995 it was taken over by Tony Ilieff, who had a new vision for where the company could go.

“DAR Solo is a single seat, single engine, high wing ultralight sport aircraft,” Tony said. “The aircraft is based on mixed construction: aluminum wings and composite airframe. New advanced technologies have been introduced and the result is a remarkable aircraft of extra low weight and good flight performance.”

AeroplanesDAR calls their system “Sheet Management software” which describes a CNC machine method to fabricate aluminum sheet parts for manufacturing. Versions of this approach are widely used by many big corporations but in recent years the technology has become accessible to small aircraft producers to efficiently design and produce aluminum sheet parts and components. “As a result, assembling elements, like wings and tail surfaces, is easy,” said Tony. 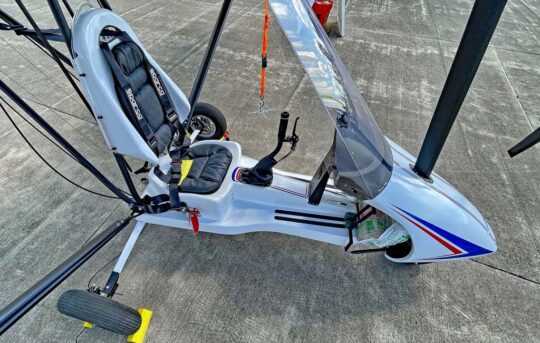 “All composite parts in DAR Solo are made using carbon, aramid, and fiberglass in vacuum molds with controlled temperature,” noted AeroplanesDAR.

Such composite technology allows integrating different parts into one. For example, the central beam on Solo and its vertical stabilizer have been combined into one element. The main landing gear is built from fiberglass using a new 2-stage vacuum system. 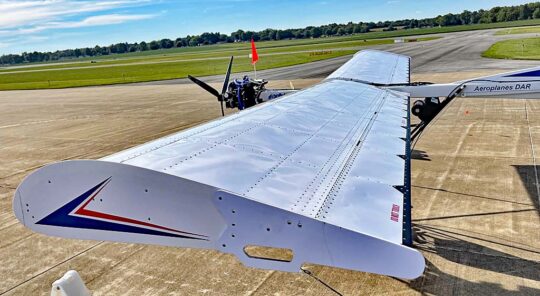 Originally, Tony said DAR Solo was designed to be sold as an airplane kit. “That’s why the airfoil shape and manufacturing assembly have been carefully chosen and modified to be easily handled by customers. Thanks to modern engineering, Solo can be assembled on a regular workshop table. Kit customers receive all important parts ready for final assembly. Such features are required for a product that will be sold as kit set intended for private manual assembly.”

In the USA, representative Kyle Hunsaker does not plan to sell kits as a fully assembled DAR Solo is priced at $27,500 and that is with an emergency airframe parachute. No great savings are possible by assembling a kit when the retail price is this low. Yes, I know “affordable” means something different to every person but in this day, $27,500 is a bargain for a construction like this. 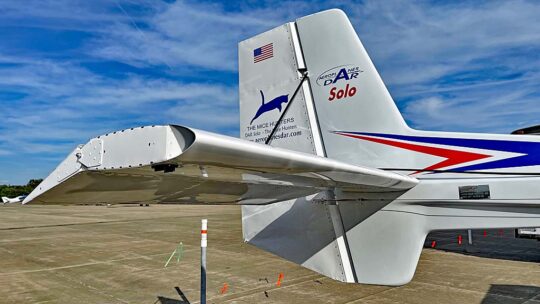 In addition to the new representative in the USA, AeroplaneDAR has established dealers in various countries. “We are placed in different parts of the world through our friends and representatives: United States, UK, Austria, Germany, Russia, Australia and Brazil,” wrote AeroplanesDAR.

The company has earned government approval in countries beside their home base in Bulgaria. In addition to meeting FAA’s regulation, DAR Solo has won German approval for that country’s 120 Kilogram Class (also honored in other EU countries), the Russian market, which has a 115 kilogram rule, and countries such as Korea. China has a similar rule and all these national programs are roughly similar to FAR Part 103. 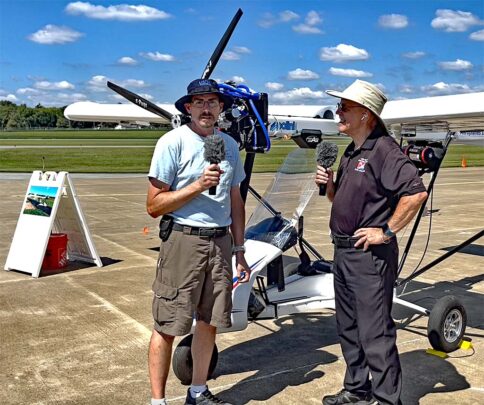 Kyle Hunsaker was interviewed for a video that will emerge soon. He is based in northeastern Ohio.

Kyle has not yet flown his aircraft although he has started taxi testing it once he got it assembled and carefully checked over. He is taking a measured approach to his operation of Solo.

However, Kyle said that the factory had already put a couple of hours of flying on his machine in Bulgaria before they disassembled it for shipment to the United States. The aircraft has been flown for a number of years in Europe where it has developed an enthusiastic following.

For many pilots who are seeking affordable aviation, the Midwest LSA Expo has shined a bright light on at least three new possibilities that are both interesting and fairly economic.

I recorded a video interview with Kyle and will try to upload it to YouTube as soon as editing can be completed. Meanwhile, Kyle’s contact info appears below.