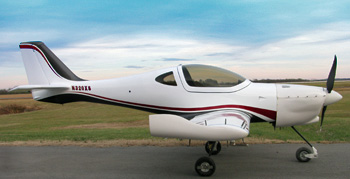 With its nose cowl unpainted and without wheelpants or other fairings, Lightning XS still easily managed 130 knots. Full XS potential will be revealed with more test flying. 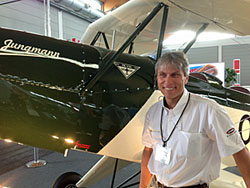 Peter Funk is a talented and prolific aircraft designer with a proven ability to grab wide attention at airshows. 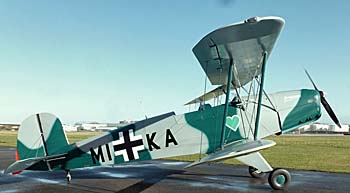 FK131 Jungmann replicas are beginning deliveries to customers. The design was announced less than one year ago.

In my previous post I made a passing mention of a coming flock of four seat aircraft loosely based on the two seat LSA that five manufacturers are presently building. As promised, more on that later. In this post I want to focus on two alternative directions. First is the Arion Aircraft Lightning XS, a kind of big brother to the Lightning LS, which can be flown as a SLSA, ELSA or EAB kit. You don’t need a medical to fly LS. You will for the XS (or “Excess”) and you will have to build it, but the newest variation from Arion promises to be a hot performer realizing the potential this all-American design has always possessed.

Arion boss Nick Otterback said, “We flew our new kit the Lightning XS [that] is based on our popular Jabiru powered Lightning kit but with several design changes incorporated.” XS has been designed to allow engines up to 160 horsepower. Along with a taller stance on longer gear legs Arion’s team can use engines spinning bigger diameter props. Also standard are 40 gallon fuel tanks and a gross weight of up to 1,650 pounds. N320XS is powered by a Superior XP320 160 horsepower engine similar to the Lycoming design. “The first flight was a kick in the pants for the little bird,” said Nick. He indicated that 130 knots came easily at a 2150 rpm throttle setting and that’s on an aircraft without fairings, wheels pants, or a clean-up kit. They are using the carbon ground adjustable prop from Sensenich. “We have yet to tune [the prop] to the plane,” suggesting that Arion expects considerably more speed. “With a normal cruise range of 2300-2500 rpm it will be very interesting to see where the XS finally settles in at speed when cleaned up and with a tuned prop.” Importantly, Lightning XS opens the door for kit customers who want engine choices and higher performance. “Our standard Lightning LSA-compliant kit with the 120 horsepower Jabiru 3300 remains available and is selling well,” Arion reported.

Across the Atlantic, European design guru Peter Funk reported on his fascinating FK131 Jungmann replica first reported after Aero 2013. Peter said, “With the beginning of 2014 B&F Speyer delivered the first two customer aircraft of the Light-Sport FK131.” Created from drawings of the Bücker 131A version, the new/old model from this talented designer won immediate strong interest at Aero, the 2014 edition of which follows immediately after Sun ‘n Fun 2014. Where the original Jungmann 131A had been powered by an 80 horsepower Hirth HM60 engine, the replica FK131 uses a 82 horsepower Walter engine produced in the Czech Republic. The basic design of this engine dates to 1935 like the airframe, but it has been updated in many details to current technology.

“The main part of the flight test program has been completed,” Peter reported, as the design moves toward type certification in Germany as light aircraft. FK131 is also being produced in kit form for kit builders and as a Light-Sport. “The recorded performance data are coming very close to the original design. Also static flutter tests had been completed; they prove the design to be free of flutter up to over 400 kilometer per hour (250 mph)!” A row of following Jungmanns are scheduled to be delivered during 2014. At present the demand is exceeding the production capacities, Peter said. Production FK Lightplane models such as FK9 and FK12 Comet (video) are represented in the USA by Hansen Air Group For examples of Peter Funk’s other attention-getting designs, see these posts: