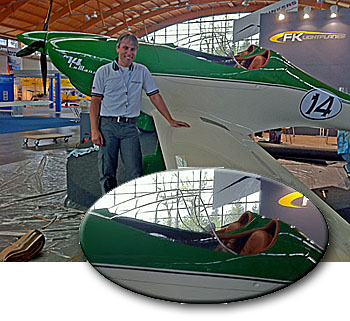 Designer Peter Funk poses beside his attention-getting Fk14 Lemans. Each occupant has his/her own windsreen; entry is made easy as the entire arrangement hinges open. 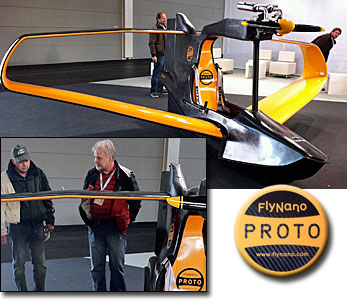 The major European Airshow, Aero, opened this morning with the usual unveiling of new designs but one aircraft appeared to be the center of attention. Peter Funk had an idea five years back but shelved it for other projects. Now the time is right for his distinctly retro treatment of one of Light-Sport aviation’s sharpest designs, the Fk14 Polaris (Alert readers will identify Polaris as the Cirrus SRS, that GA company’s onetime entry in the LSA sweepstakes.) *** Even experts accustomed to following the latest in new or updated designs were caught off guard by the unorthodox entry (photo). With dual windscreens and race car bodywork, the open cockpit creation charmed many who gained early access to the great exhibit halls of Aero… 11 of them, each the size of a gymnasium. While exhibitors were assembling their displays Fk Lightplanes’ staff grabbed lots of attention with their Fk14 Lemans. *** Constrained by their ongoing contract with Cirrus until the end of the year, Fk Lightplanes sought permission before revealing Lemans and sales will not happen in 2011. Yet Lemans will be a show hit for Fk — it already was, actually, even before Aero opened. Get more info on Fk Lightplanes. ||||| Another fascinating project is the FlyNano “Boxwing.” Created in Finland by Aki Suokas FlyNano has several distinctive features… besides the connected lower lifting wing and upper stabilizing surface. From a weight standpoint, the tiny carbon fiber aircraft could easily fit America’s Part 103 category at a mere 70 kilos (154 pounds) empty. So even powered by the British Bailey four-stroke engine, which the designer thought had sufficient power, FlyNano handily fits Part 103’s slim weight limit. And FlyNano is a seaplane, using a hull as its main lower fuselage component. It hasn’t flown yet but is ready “as soon as our lakes unfreeze.” Get more info on FlyNano. ||||| The other major development for Light-Sport at Aero 2011 are several new entries in larger airplane classes. Tecnam started this trend with the twin engine four seater they type certified last year, now greatly topping that by revealing an 11-seat regional commuter aircraft. The company also has a new Lycoming O-233-powered Eaglet LSA plus a four seater amid their huge airshow display. More on these after their press conference. Flight Design unveiled their four seat C4 via a full-sized mockup. The new GA candidate looks like a very grown-up CTLS, arguably the most handsome iteration yet of their best-selling CT series. Pipistrel has a four seater… and… well, Aero has lots more. Return soon to see and read about many fascinating entries at Aero 2011, where more new airplanes are introduced than any other show I attend.