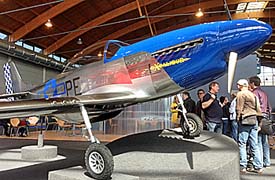 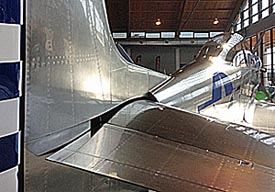 Look closely. Can you see the rivets dimpling this Mustang replica’s skin? Actually, you can’t. (see next photos) The gap you see will be covered as soon as possible; the show deadline prevented doing so in time. 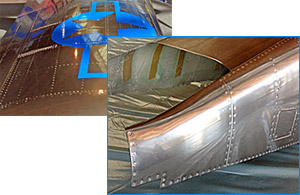 Looking at the upper wing, FK 51’s rivets sure appear real. But as the yet-unmounted part shows, this is all fake … a truly excellent fake. 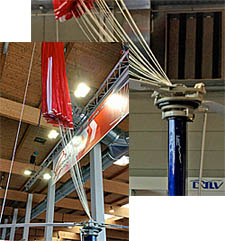 Photo Galleries — Thanks to my good friend and LAMA Europe collaborator, Jan Fridrich, I offer this link to his many photos of Aero 2013. Photo legends are written in Czech language so few Yankees will be able to read them. As the old saying goes, “A picture is worth a thousand words” so Jan’s photo review is worth hundreds of thousands. Enjoy and I’ll add more in the days ahead. Meanwhile Thanks, Jan! • Aero is a special show for many reasons, but one of the best is that we can view so many airplanes we never see in the USA — and fascinating designs many of them are, indeed. UltralightNews YouTube channel and I are working hard to collect lots of videos including a quick tour of many airplanes you can’t buy in the USA … yet.

Super Authentic P-51 Replica — Roland Hallam, the South African boss of light aircraft producer FK Lightplanes in Poland, showed us around the dazzling FK 51 Mustang project. First some of the impact points and then a bit about the incredible detail. Currently FK 51 is powered by the Rotax 912 that climbs so many of our Light-Sport Aircraft, however, they are talking about a somewhat more powerful engine to better approximate the performance of the original Merlin engine. With retractable gear and in-fight adjustable prop, this replica will fly faster than permitted under LSA rules but they plan a fixed gear, fixed pitch prop to stay within those guidelines. It will likely also be offered as an Experimental Amateur Built model. A Rotax 912 doesn’t sound like the Merlin so a loudspeaker system built into the engine cowl adds audible authenticity. A series of six exhaust stacks per side are also fake but a genuine smoke system is built in to simulate emission of the appropriate smoke during the start of the huge engine that powered the World War II airplanes. The sound coordinates with the smoke for engine start-up, running, and shut down. Cool touches indeed.

Incredible Detail — Sound and smoke are great but what literally blows the minds of those examining FK 51 is absolutely amazing attention to detail. Most ’51 replicas simply cannot match the original Mustang on a rivet-for-rivet basis. FK 51 does! The “FK” in FK Lightplanes might stand for “fake” in their current replica or “classic” line but the work effort is certainly real. Roland notes just shy of 100,000 fake rivets molded into the composite skin of his 70% replica Mustang, which he assures is correct in the placement of each and every last rivet or screw head. You have to see FK 51 in person to appreciate the rivet-dimpled skin all achieved in carbon fiber but the accompanying pictures will try to give you the idea. You can see fiberglass on the back of the part (photo) yet it appears for all the world as a metal skin on the exterior (carbon fiber will replace the fiberglass in in FK 51’s final iteration; glass was used as they hurried the example for exhibition here at Aero). You may be able to see this astonishing entry at AirVenture this year. If so, I bet you’ll be as amazed as were Aero attendees.

Parachute In Mast — The last item in today’s post is a surprising entry of a gyroplane … but it isn’t about the aircraft, called Matto. Instead, my focus is on a first-of-its-kind emergency airframe parachute that is packed into a larger-than usual rotor mast. That’s why our photo does not even show the aircraft. The company reported, “The mandatory rescue system in three-axis airplanes [required by German rules] … does not need to be used in gyroplanes.” They added that German authorities did not see it as possible to offer an engineering solution for gyrocopters to have a parachute but German Gyro boss Otto Strauss and his team believed differently. “In a proprietary solution, the parachute is stowed in the central pole of the rotor,” said the company. A new rotor head with special roller bearings and an inner diameter of about 200 millimeters (just under eight inches) allows integration of the parachute and pyrotechnical device to extract the canopy above a spinning rotor. We’d like to see test videos but certainly the idea is intriguing and may be appreciated, especially given strong gyrocopter interest in Europe.