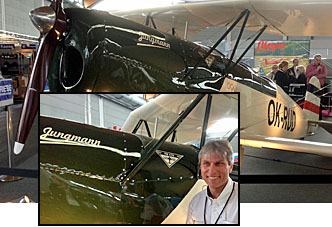 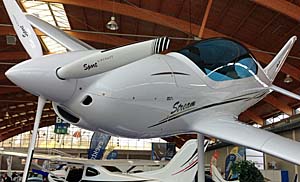 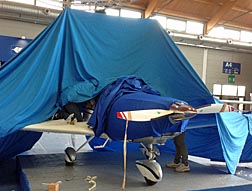 Not quite yet … visitors will have to wait for the formal unveiling before they see all of Tecnam’s new Astore. 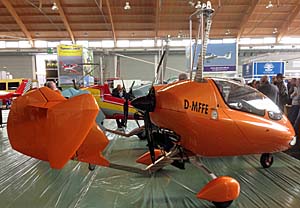 Gyros like the Trixy Aviation 4-2 R are selling briskly and are available ready-to-fly in Europe and … well, everywhere but America.

Excitement Amid the Chaos — If you’ve been to any show the day before it opens, you know what I mean by “chaos.” With mere hours to go before the doors open to the public, it appears no hope exists to be ready in time. Weather in Europe — a lousy winter drags on inexorably, as it does in the northern U.S. — is preventing airplanes from arriving. Protective plastic still covers the carpets. Booth spaces, called “stands” in EuropeSpeak, are still being assembled. Everywhere you look, it seems a week’s worth of work remains but Aero opens tomorrow morning as I write this. Fear not. I’ve seen this act before. Somehow, it gets done and no one is the wiser. As the frenetic pace quickens to a climax, I uncovered a few delights worthy of passing on before Aero truly gets under way. Here we go!

Apple Event Magic? — Peter Funk (photo) may be the Steve Jobs of Aero. With German regularity, he pulls a rabbit from the top hat. Two years ago he wowed the crowd with his innovative LeMans. This year, he upped the ante, offering not one but two surprises. All ready for my camera was the FK 131, a modern replica of the 1930s Bücker Jungmann 131 biplane of the 1930s. Ten will be produced in cooperation with the father-and-son Czech company Podesva Air and perhaps no more will be made (a nearly sure way all ten will sell without having to commit more resources at present). Peter found the lightweight “A” model in an old book and passion tells the rest of the story. We’ll have more on this fascinating project but the lighter-than-original reproduction will inevitably draw crowds. Meanwhile, check out more about the FK 131 on the American Bücker Pages website. Peter’s other surprise is the FK 51, a composite P-51 replica that looks for all the world like metal, authentically shaped and even with fake rivets, yet made entirely of composite. Workers were still assembling the aircraft but wait until you see photos of this beauty!

Gathering Stream — As Funk’s Jungmann is a limited production — seemingly one of those ascendant ideas in the LSA industry — so is the TL Stream. U.S. importer of the TL brand Bill Canino says the tandem-seating Stream is intended to serve a narrower market than the Sting or Sirius from the same company. The airplane that somewhat resembles Jaro Dostal’s Shark project, may do a European tour before possibly making an appearance at AirVenture. It may also entertain different engines and has some aerobatic promise. Nothing is certain yet, but the proof-of-concept up on a slim display mount looks terrific and appealing. TL is also showing a TL-3000 Sirius on amphibious floats.

Astore Under Veil — In Tecnam’s sprawling display space at Aero 2013, the fully aerobatic and single place Snap is prominently on display, now bearing the Italian company name. We’ve seen this design at Aero before plus prior and continuing import source Bill Canino (working in conjunction with Tecnam North America, said Phil Solomon) displayed Snap at AirVenture 2011. But the more mysterious part of the display is for the soon-to-be-unveiled Astore, a new Tecnam low wing entry in the LSA class. As the space is assembled we got a partial sneak peak of the aircraft helping to commemorate the company’s 65th year in business. Tecnam had most of their extensive fleet assembled and appeared to be preparing for “a really, big shew” to borrow an opening line from oldtime TV host Ed Sullivan. We’ll be present at Tecnam pulls back the curtain and provide a more complete look at their new model.

Hot, hot, hot Gyros! — As we approach the ten-year mark since FAA first unleashed the game-changing SP/LSA rule on the aviation world, the agency still cannot make up their collective mind on how to handle Special LSA gyroplanes. Though part of the LSA panoply of aircraft types, this isolated community of rotorheads must still make do with kit-built aircraft in America. To call gyro enthusiasts who have put in time on ASTM committees preparing for SLSA gyros “frustrated” would be to dramatically understate their feeling. Meanwhile, in Europe, gyros are going great guns. One report claims more Rotax engines are bought by gryo producers than any other aircraft class. All seem to agree demand is strong and the sleek models several companies are showing endorses this position. One we looked at in an early media tour of the many halls of Aero was of the Trixy Aviation 4-2 R (photo). It would sure be interesting to see what happened if FAA ever got around to approving SLSA gyros … but don’t hold your breath rotor enthusiasts.