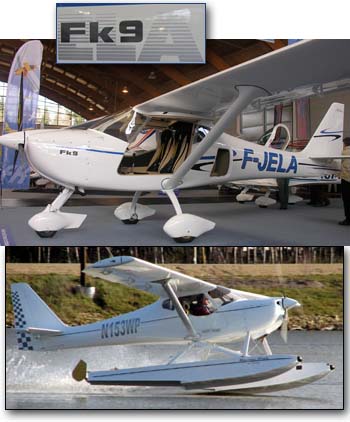 Most American pilots don’t recognize the brand FK Lightplanes, though many do know of one of their models. Cirrus Design based their celebrated entry into Light-Sport Aircraft upon the Fk14 Polaris. This lovely low wing looks enough like a Cirrus that the Duluth, Minnesota manufacturer selected it as their platform to offer what they called the SRS. *** The producer of the best-selling SR22 felt they needed to “Cirrus-ize” the Fk14, but now with the GA industry in sharp decline the company put the SRS project on hold to focus on their Vision jet (which sells for 10X more). *** Yet FK Lightplanes also builds a handsome high-wing model, which has gone through significant refinements in more than a decade on the market. “We’ll still make our Fk9 Mark 4 [the earlier model],” said company director Peter Funk, but his company is now launching the Fk9 ELA (as in European Light Aircraft), a version that more closely matches LSA specifications. It has higher maximum takeoff weight and appears roomier even to include a new baggage door. *** FK is also enjoying broader representation in the USA as importer FK Lightplanes USA joined forces with Hansen Air Group to represent the Fk9 series in America.