Icon said the molds for all composite airframe components have been completed, some of which are shown at Cirrus Aircraft’s Grand Forks, North Dakota, facility. The dark molds are made of carbon fiber; the light ones are machined from solid billets of aluminum and steel. Look under the skin with an X-ray view of components of the A5. 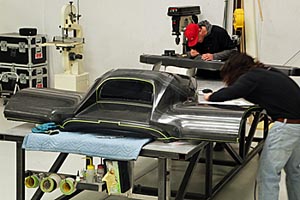 Icon technicians prepare parts for bonding and assembly by trimming excess material and drilling the holes required for installation of aircraft systems. A technician uses green lines for reference as he trims the center wing skin. Another tech in the background drills holes in the center wing spar. 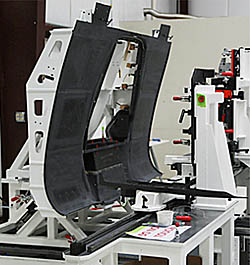 Steel assembly fixtures for the center wing are ready to receive wing skins. Parts are held in place during assembly by suction from a central compressor and vacuum lines.

One of the most celebrated of the Light-Sport Aircraft fleet is Icon Aircraft‘s A5 seaplane. The Southern California company has passed the benchmark set by Cessna after they first announced their Skycatcher to great fanfare back in 2007. Since Icon first emerged in 2005, the company has gone from one man with an idea to one of the largest players in the LSA space … yet they have yet to produce their first airplane. Some aviators have voiced concerns the company is a marketing juggernaut that raises money but builds nothing. To confront this perception and in preparation for their usual announcements at AirVenture — the only show where Icon chooses to present itself for the time being — Icon released photos and some details of their work to make production a reality. One of their earlier announcements related to engaging SR20 and SR22 manufacturer Cirrus Design to do component assembly. The move seemed smart as Cirrus is closing on production of 5,000 airplanes made in ways similar to what is needed by Icon.

At AirVenture 2013, Icon was able to announce obtaining a weight exemption after a protracted wait from FAA. This was reputedly a key ingredient to allow manufacturing of the aircraft customers were expecting. Somewhat earlier the company indicated it had all the funding it needed so some Icon watchers expected to see more about manufacturing. Now Icon has said, “As [our] A5 moves closer to FAA approval and serial production, the Icon team continues to progress with assembly of the first A5 production prototype. Engineering Serial Number 1 (ESN1) — currently being built at ICON’s facility in Tehachapi, California — is the first of several planes that will support the FAA compliance audit for LSA airworthiness. Before a new company can enter into serial production, their design and manufacturing systems must undergo a very thorough audit of those processes if the FAA chooses. After proving themselves, to include test flying a conforming example, and following FAA review, manufacturing can commence. In the past the process from FAA’s first visit to production beginning can run three or more months (more time if many “findings” were discovered that need “corrections”). Given their preparation, Icon can be expected to move relatively swiftly through approval.

ESN1 will be the first aircraft from Icon to be built using production tooling. The company said, “[ESN1] is on target for completion later this year.” In the third quarter of 2013, company vendors began manufacturing aluminum, steel, and carbon fiber molds Cirrus Aircraft will use to build the composite airframe components for production A5s. Additional suppliers began construction of the assembly fixtures or tooling Icon will use to manufacture completed aircraft. “To date, all airframe components and assembly fixtures have been received at [our] facility,” Icon reported. The company observed that an A5 LSA seaplane consists of more than 2,000 parts and they have created a dedicated inventory storage hangar, barcode tracking system, and an inspection station for all these component parts. Such a system is part of what FAA will review during their design and facility audit.

Icon’s team is currently focused on ESN1’s structural composites, and workers have begun bonding all major components of the airframe, including tail, fuselage, wings, control surfaces, and canopy. As the structure of ESN1 comes together, the team will transition its focus to systems integration, meaning installation of the engine and prop plus electrical systems, landing gear, interior, and parachute systems. “Years of design and preparation have gone into creating the A5,” said Icon, “and [our] team is thrilled to see the first production aircraft coming together in physical form.” Photos with this article provide a look at the progress Icon’s engineering team has achieved as the company approaches an important production milestone.

In the video below, Kirk Hawkins and Steen Strand promote California’s Stanford Graduate School of Business where the two Icon founders met. Enjoy some great flying scenes while hearing how their collaboration started.