Important FAA-related message at end of this article. 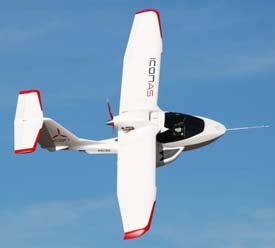 Opening day at AirVenture Oshkosh 2013 and the very first announcement before exhibit spaces even opened was a press conference from Icon Aircraft. To a media-only group of perhaps 30 or 40 media personalities, CEO Kirk Hawkins began, “Is there anyone here who doesn’t know what this about?” No one responded; everyone knew what the rumor mill had begun spewing. Icon is in good company. Even premiere new product secret-keeper, Apple Inc., has trouble announcing something that no one expected. Yet a few comments from the top gun at Icon were of special interest. One other observation first: it was a media event, but if even a single FAA person was in attendance, they were under cover. No FAA shirts or badges could be spotted. Thus Icon made their announcement without any active FAA participation. 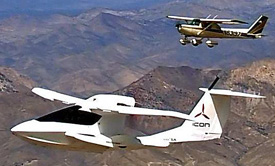 Icon received Grant of Exemption No. 10829 for a weight increase with FAA stating,”The combined features and SRA (Spin Resistant Airframe) incorporated into the Icon A5 design … are recognized by the FAA as significant safety enhancements.” FAA also referenced that the agency felt an exemption was “in the public’s interest.” Kirk Hawkins added that his engineers “put safety ahead of arbitrary weight limits” and forged ahead with enhancements to include a more crashworthy cockpit, the airframe parachute (about which they’d already talked but with which the weight increase became more possible), and of course, the wing cuffs, “a synthesis of several known ideas put together in a way that finally worked” to provide a Part 23-worthy stall resistant airframe. 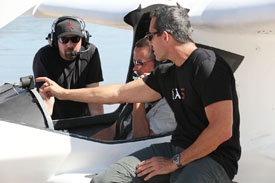 More structure on wings and tail was needed to achieve the SRA and that drove the request for weight exemption, Hawkins added. However, Icon said they do not plan to use all 1,680 pounds they could under the exemption. In their press conference, the company mentioned a target weight of 1,510 pounds, only 80 more than allowed for seaplanes without an exemption. These and other refinements mean that the price will rise from $139,000 (in 2009 dollars) to a starting price of $189,000 but you’ll get more airplane in the form of the costlier fuel injected Rotax 912iS — and more fuel efficient — engine, a touchscreen Garmin 796, and night lighting.

The results: Icon will immediately increase the current effort to prepare for production. On a large projection screen they showed a handsome computer-imagery video of a production facility full of A5s being built. It’s all animation but it was done with the style we’ve come to expect from the Southern California company. So, the exemption has been granted and at least three other companies told me within 15 minutes they will also prepare a request based on safety features (but see Update below). FAA may not grant them all — they may not be adequately prepared and documented — but the agency has to at least review them and in a period of budget constraint, these requests will surely take plenty of time and could consume time from FAA personnel. Despite such potential hiccups, Hawkins felt Icon’s grant of exemption was a positive for the whole LSA industry and many, though not all, are inclined to agree.

Update 7/29/13 evening — At the LAMA board of directors meeting, FAA further clarified their approach with Icon.

“A weight increase was not a factor in granting Icon’s request for exemption,” a senior FAA executive told the board members. Instead, the agency “rewarded” Icon with a weight increase because they felt the company had achieved a highly stall resistant wing design to avoid the reason for 70% of fatalities, namely stall/spin.

“Any company that addresses this [stall-resistant airframe] can also get the exemption but they must prove their solution.” Such an aircraft must still meet all parameters of an LSA, specifically the stall speed, max speed … everything except weight.

“FAA would obviously love for all LSA to be stall resistant,” because this could save lives. Requests for a weight allowance for parachutes, safety belt airbags, fire extinguishers and other safety gear are very unlikely to get a positive reply. 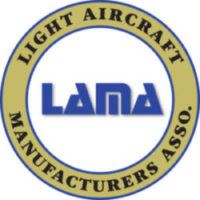 FAA also noted that a pilot with a Sport Pilot certificate could fly an exempted airplane up to 1,680 pounds with 135-hp and that a Light Sport Repairman could work on such an Light-Sport Aircraft.