Icon Aircraft’s A5 drew plenty of visitors to their AirVenture booth in recent years. 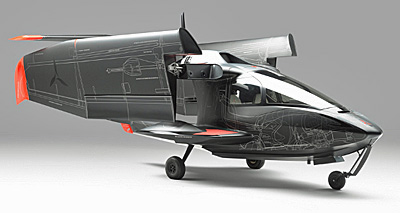 The powered folding wing of the A5 is a big hit; the vinyl graphic overlay gives clues to its operation. 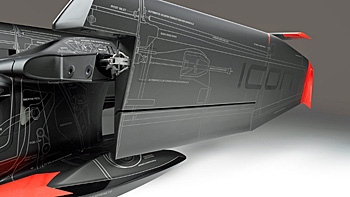 When visitors got closer to the X-Ray view A5 mockup they could almost see through the skin to the hardware underneath. 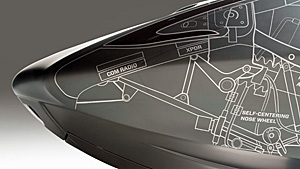 As you got very close, you could see some individual components identified.

If you traveled to Oshkosh for AirVenture 2013, you got to see a lot of airplanes and other aviation gear. EAA reported a very substantial crowd of more than 500,000 attended. As this might translate to 150-200,000 pilots, the big figure nonetheless means that more than 400,000 American pilots did not go to AirVenture. That majority of flying enthusiasts missed a lot but recently Icon Aircraft sent out news about their X-Ray View of their Light-Sport entry. This impressive display was shown in their big tent and many examined the details. If you missed AirVenture 2013, we’re happy to show you a little of what you missed.

Icon circulated photos of what the company informally terms its “three-dimensional CAD drawing” of the company’s A5 amphibious Light Sport Aircraft (LSA). “The full-scale 3D model employs automotive vinyl wrap technology,” explained Icon, “printed with an adapted projection of the Computer Aided Design (CAD) virtual model depicting the location and layout of key structures and systems of the aircraft, which provides an unprecedented level of technical detail about the production A5.” If you’ve been wondering what’s under the skin of the handsome LSA amphib, the special graphics were very helpful.

Even when Icon enters production owners and interested parties won’t get to see the same detail that factory workers will see. Icon Vice President of Sales, Craig Bowers, said, “Our design and engineering teams have made tremendous progress on the A5, and much of it was initiated in a virtual environment.” He said the vinyl wrap treatment “was designed to demonstrate that progress as well as provide detailed information regarding design intricacies and construction.”

“Starting with the virtual model of the aircraft, the design team selected the technical features they wished to highlight on the three-dimensional model and determined how to map them onto the surface,” the company exlained. “The aircraft was wrapped in black vinyl and the graphics depicting the internal systems were overlaid with silver decals and red accents. The resulting graphics … [allowed] … the opportunity to carefully study the aircraft’s technical details.” The California company said work continues with production of the first four aircraft to support the FAA LSA approval process, the first of which is scheduled for completion in mid-2014. So those thousand owners still have a wait to take possession of their A5 but now they know better what they’re going to get. According to news reports and confirmed in person at AirVenture, it appears at least some production will occur in central California in Vacaville as we reported earlier (see end of article).