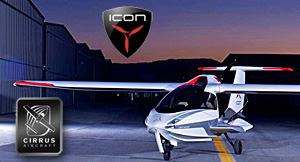 Cirrus and Icon partner. This is getting interesting.

Icon will obtain parts from Cirrus and assemble them in their Tehachapi, California facility. 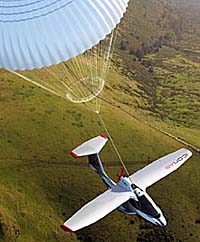 Icon and Cirrus both chose airframe parachutes. Cirrus made quite a name for itself with the choice.

Icon Aircraft and Cirrus Aircraft announced a deal for the general aviation composite aircraft producer to build parts of the Icon A5 and the news introduced dates for the A5 to come to market.

*** Several years ago I traveled to Cirrus’ Duluth, Minnesota plant in the company of the Icon top leaders, including CEO Kirk Hawkins. In those days, Cirrus was seeking info to make decisions about their since-dropped LSA project called the SRS (photo). The Icon fellows were obviously impressed and the trip subsequently paid off.

*** “Cirrus has a global reputation for producing truly outstanding composite aircraft structures,” said Hawkins. “Their extensive experience, specifically in composite sandwich-production techniques, makes them an ideal production partner for Icon.” Cirrus has built more than 4,000 of its SR models. Returning the admiration, Cirrus CEO Dale Klapmeier said, “The Icon A5 is certainly the most innovative LSA on the market.” He added, “We believe that Light-Sport Aircraft and Sport Pilots are critically important to the growth and future of aviation.”

*** Like most airframe makers these days, Cirrus may not be using all its capacity. On the other hand, Icon needs to rev up its engine of production. The partnership may address both needs and answer questions. Plenty of attendees to AirVenture 2012 were asking why it’s taking the California company so long to enter production.

*** Though Cirrus has Chinese ownership (an amazingly common statement of late), all the components produced by Cirrus for Icon will be fabricated at the company’s Grand Forks, North Dakota facility. Icon will then do integration and final assembly, finishing, and testing at its operation in Tehachapi California where their engineering staff has been quartered for several years.

*** According to an AvWeb report by Mary Grady, Icon expects the effort to produce about 50 airframes in the first 12 months, and about 250 to 300 in the second 12 months, per Icon’s Amy Julian. Icon reports more than 850 deposits for the A5. And, according to AOPA‘s Al Marsh composite component production is set to begin at the end of 2012, with the first production aircraft scheduled to be completed in the summer of 2013.

*** One delay could involve Icon’s request for an exemption to bump up the weight from the present 1,430-pound limit for seaplane LSA by 250 pounds to 1,680 pounds (almost the weight of a Cessna 152, by the way). The weight allowance is intended to cover Icon’s spin resistant airframe design plus other safety features. No word yet on when or if FAA will decide to offer the exemption.

*** Following the article about Wipaire floats and Sensenich props entering the LSA market place, Cirrus’s return adds yet another general aviation company continuing to focus on the light end of the aircraft spectrum. Interesting how things evolve.