A mid-week demonstration featured Europe’s Volocopter and America’s Opener BlackFly. The two (three actually, a pair of BlackFlys flew) demonstrated their eVTOL flying capability. They could hardly have been more different.

Billionaires are investing in, uh, what to call them? …drones, multicopters, eVTOLs, UASs, UAVs, Powered Lift aircraft, the list literally goes on and on. The lack of a widely accepted generic name is one of several indications these air taxis of tomorrow are still in a fairly distant tomorrow.

Two industry experts gave me their judgment after viewing the Volocopter and BlackFly demonstrations. Both agreed the Volocopter presented better, performing a true demonstration of its vertical launch then transitioning to forward flight, manuevering, and then doing a landing. Both also said the BlackFly was much less impressive. “They just kind of bobbed and floated around, not doing any maneuvering or making a transition to forward flight,” each agreed. Both wanted to like each aircraft but one clearly won in their minds.

This story is not about either of these developmental vehicles, but here are two links for those interested in the Volocopter or BlackFly.

In the lead photo (as seen on social media and our homepage), I imply that we are in a Generation 3 of electric aircraft. I admit that is completely arbitrary. The entire field is still too fluid to assign the likes of generations but let me explain my word choice. 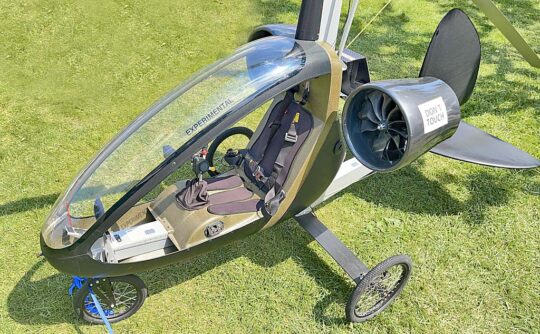 I recall when Randall Fishman made some of the first public flights (at AirVenture and Sun ‘n Fun 2007). His electric trike performed quite well and showed some clever thinking. Randall went on to more sophisticated electric designs but he was too ahead of the market. I’m calling that and similar experiments of their day Generation 1. They are modern-day pioneers.

Then came a profusion of more sophisticated entries from around the globe. We have fixed wings, trikes, even gyroplanes that employed battery power to fly. Some of these got more elaborate. I even reported on a genuine hybrid electric C42 from Germany. I call the sum of all these developments Generation 2. These designs represent advances in electric propulsion state of the art.

At AirVenture 2021, I saw two examples of what I’ll call Generation 3 designs. These are battery electric designs but employ electric in different ways or use unconventional approaches. 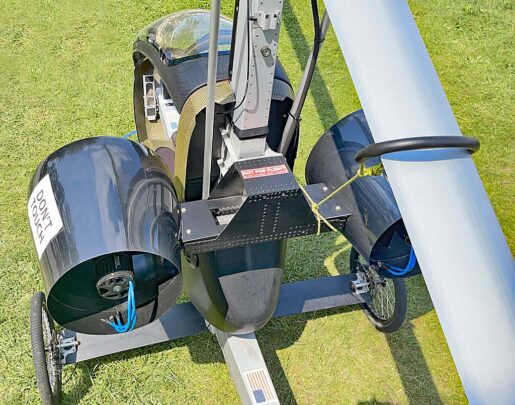 Fusion eNano — Earlier in the week, I wrote about the Fusion Nano seen in the ultralight area. This product is on-sale and presently uses a lightweight, higher revving Italian two-stroke engine (though the engine manufacturer may change). Nano is a Part 103-compliant gyroplane with a modest price tag.

At the other end of the field is an electric project based on this platform. It’s clearly early stage but appears an interesting concept employing dual ducted fans for thrust. Since it isn’t done, it not worthwhile to speculate about how it will fly or what its range may be. They aren’t the first to try twin ducted fans. This Airbus project called E-Fan had a similar look.

Nonetheless, a Fusion eNano as a legit Part 103, is workable as a battery electric propulsion aircraft. I hope we’ll see it fly at a further AirVenture, but neither will I be holding my breath. So many of these electric projects don’t seem to endure, even the ones funded by billionaires to the tune of many tens of millions of dollars. I hope this one lasts; it’s intriguing.

Merlin Lite — You look at the images of Merlin Lite and it clearly has a gasoline engine up front (a Polini), so why am I including it in an electric article? Because it has a very innovative “electric assist,” I will call it. Develop Chip Erwin calls it DEP-OD, military-like nomenclature for Distributed Electric Propulsion – On Demand. These small wing motors, used briefly to enhance a phase of flight, need only a battery you can hold in your hand because they are not primary thrust power (though they add a good measure to the total). 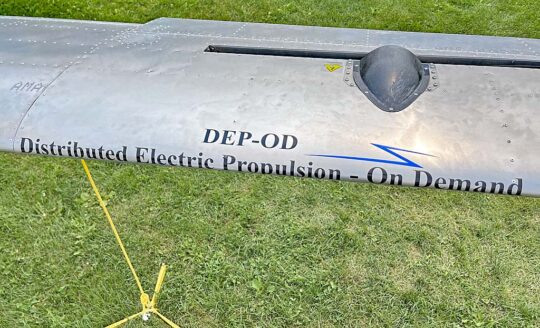 I have a video in the works where Chip will explain this more fully and talk about its merits.

Here I will note that accelerating airflow over ailerons is very helpful to slow speed flight and not a new idea. You may have seen the photos of a modified Tecnam Twin with multiple small electric motors lined up all along the leading edge. The idea is to accelerate airflow over the entire wing so this aircraft could perform feats a conventional Twin could not.

By pushing air across the aileron, Merlin Lite with these small motors buried in the wings could maintain control down to nearly zero airspeed. The small wing mounted motor accelerates air over the wing, too, making for very, very short takeoffs. “It could cut takeoff roll by three times,” Chip suggested. 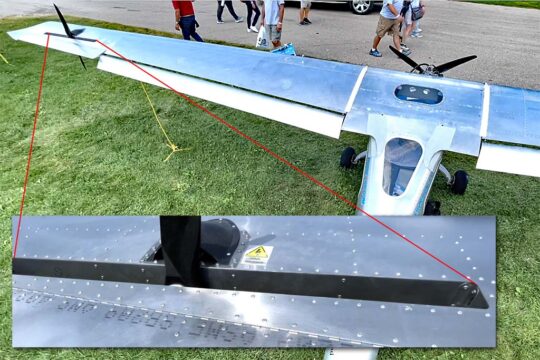 So Merlin doesn’t use electric power for main thrust but does make effective use of electric propulsion.

As a side note, Merlin Lite definitely will be offered with battery electric for primary thrust. Combine the wing (and possibly tail) in-wing thrust units with main power and you could have an ultralight with up to six motors, said Chip. Does that sound like a lot? Maybe, but Volocopter has 18 motors.

Electric has a future, I’m sure, but it has a present as well and it is in Part 103-type ultralights today. I’ll try to keep up for those many of you intrigued by electric.

Whatever the product timelines, these machines have large appeal.

Now something mostly for fun… 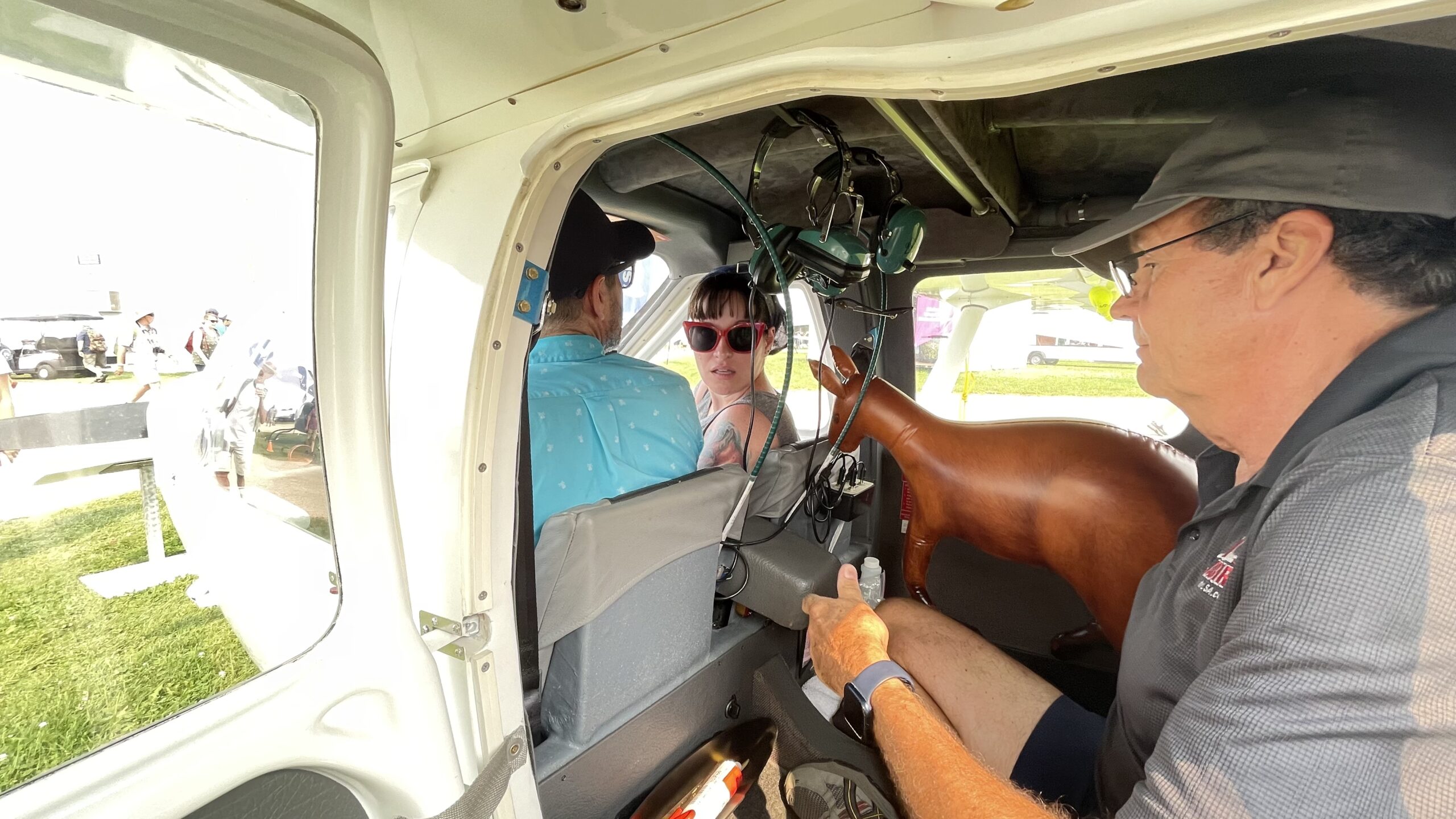 Jabiru importer and longtime industry expert Scott Severen demonstrated a rare but effective sales technique. His Jabiru J230-D has a cavernous aft cabin. It’s that large because in Australia, the same airframe can be turned into a four seater. *** Scott entered the aft cabin through Jabiru’s third door to answer question of a couple checking out an aircraft for sale. *** It appears her expression is one of approval …”Look at all that room back there!” Scott’s lanky build and tall height appeared to fit easily and he entered with ease. (Kangaroo not included.)