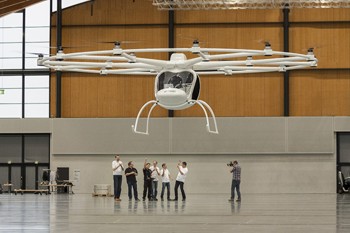 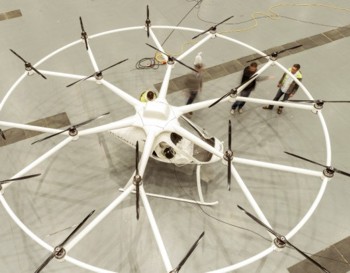 A disc of discs: 18 in all, all electric.photo courtesy e-volo

It’s premature if not off the point to say this exotic, beautiful prototype will be the death of the helicopter. I will flat out make a prediction: a whole new type of flight is here … and it will change everything … and I mean everything about how we fly.

I was musing the other day, while catching up on the latest multi-rotor RC model technology with which to populate my Christmas wish list, about how long it would take before we saw a serious effort to build a human-carrying version. Clearly I was way behind the buzz curve: talk about instant gratification! E-volo of Karlsruhe, Germany has just made a lightspeed leapfrog over pretty much every other vertical takeoff/landing design or project I’ve heard about. The gamechanger: the just-maidened VC200 Volocopter. Watch the video, then read on. This project and others like it is going to change flight as we know it, make no mistake. It would even be a legal SLSA since it carries a max two occupants and, well, look at it: no way can Volocopter weigh more than 1,320 pounds since it’s all carbon-fiber composite. There is one glitch though, or rather 18 of them: it has more than the single piston-powered engine mandated in FAA’s LSA regulation.

No matter. This nicely sculpted, mechano-buglike craft not only looks right, but could lead to a wave of simplest powered flying vehicles ever … unless you’re thinking powered parachutes, which is sort of like saying beating a bowl of eggs into submission with a cement mixer is the simplest way to make an omelet. (No offense intended against PPCs; they’re a ton of fun to fly.). So while FAA must first change the LSA regulation to allow electric propulsion for LSA (or perhaps issue an exemption), industry is ahead of the game. ASTM has already finished an electric propulsion standard. However, even more significant I believe is this: No force on earth will keep this burgeoning technology out of the hands of eager pilots…and those who have always dreamed of simply flying without hours and hours of flight instruction just to get the feel of how an airplane or chopper must be controlled to fly safely. The multi-rotor flying concept will, as it evolves and is refined, be more like learning to drive a car than fly an airplane.

As such, E-volo’s impressive accomplishment signals a paradigm shift in manned flight. Similar flying machines like the eternally-in-development Moller Skycar or the recently announced Terrafugia TF-X, projected to debut in, oh, about a decade or so, riff on the vertical rotor concept by sporting tilt-rotor designs. The E-volo VC200 dismisses in one 18-brush stroke all the mechanical complexity and expense that tilt rotors are heir to, thanks to its ability to instantaneously migrate thrust to each and several – or all – of the rotors independently, entirely through electronic computer control. And how does that work, you ask? Rather intuitively I would imagine, once the control synchronization is perfected, and so easily that it should revolutionize piloting forever. Want to take off? Give it full power to climb straight up. Want to move forward? Piece of cake: Push the yoke and the rear array of motors automatically increases thrust while the forward motors decrease thrust. Result: the “nose” of the circular motor array dips down as the “tail” raises up and you slide forward. I imagine it would feel very much like accelerating in a chopper, or catching a big wave on a surfboard. Kind of exciting, in other words. Think about it a bit more and you’ll realize you can do the same thing in reverse … I mean back up just like driving a car, without changing heading first. Or slide (not bank or turn, but slide, to the left, or to the right, or in any direction). You’re not required to bank at all to turn in fact, like you would with a rudder (airplane) or tail rotor (helicopter). The same variable-thrust concept works, and rather finely nuanced I would imagine, with 18 motors each providing its increment of thrust vectors, to turn you anywhere you want to go … without adverse yaw or stalls to worry about either. As long as those props are turning, you’re flying.

Consider all this hybrid versatility: You will be able to fly the VC200 like an airplane, but also make vertical takeoffs with it like a helicopter, or hover in position and rotate around the vertical axis. Quadcopter and multi-rotor RC models have been demonstrating these traits for years now, and with excellent, refined control. It’s a hoot to fly the models … imagine flying in a full-sized one! I’ll be doing my next column in Plane & Pilot magazine on this technology simply because it’s potentially the most exciting, revolutionary flight concept to come along since possibly the first, unheralded flight of Gustave Whitehead, who flew a powered aircraft in 1901 – two years before the Wright Flyer. It’s all part of the Remote Control technology that led to the explosive development of UAV (drone) flight and huge and ongoing advances in electric powerplants, battery technology and computer control. And this is just the beginning folks. Follow the link above for more from E-volo, and look for my magazine column in the January/February 2014 issue, on sale in December.

Some quick specs on Volocopter (and remember, this is just a prototype): 6 blocks of batteries power the 18 rotorsCurrent endurance: about 20 minutes, with one hour anticipated and extended range as technology evolves.Cruising speed projected at 54 knots and max altitude of 6,500 feet. I’ve seen You Tube videos of small quadcopters flying well over 100 mph … speeds will increase as the complex aerodynamics of several simultaneously spinning propellers is better understood and refined.Redundant power wiring: three batteries power each “arm” of rotors, so two batteries could fail and the VC-200 would still be able to land safely.A ballistic parachute system will be on board for backup in case of catastrophic power failure or mid air collision. Conceptually, the rotor array would be jettisoned first: now that would make for a fun ride. Another check in the plus column over helicopters: shed a rotor blade there and you’re toast.E-Volo’s goal: to make this mode of flying safer than any air vehicle in history.More redundancy: 20 small but powerful computers are the brains of the operation … and any single computer can fly the VC-200 on its own.The several-minute maiden flight, with multiple landings and takeoffs, was held in an indoor arena. Early indications were that the craft performed better than expected, in particular with less vibration although 18 motors were doing the heavy lifting.It was also much quieter than anticipated; you can hear on the video what a nice, whirring-sans-eggbeating sound it puts out.Visionary Erik Lindbergh presented his Lindbergh Prize for Innovation to e-volo in 2012 for its single-seat experimental multi-copter, saying, “We believe that the development of the Volocopter holds significant promise to radically change short distance transportation.”