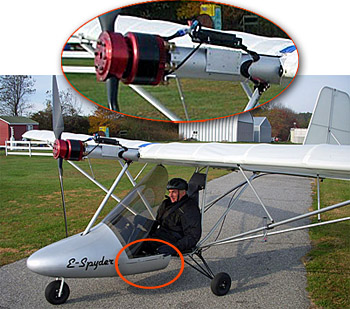 Prototype version #3 has longer wings and a slide-in battery box (circled) that greatly streamlines the look. 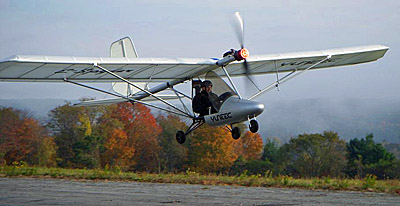 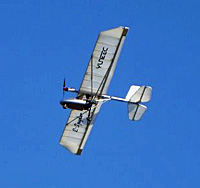 The extended wings of E-Spyder #3 have sheared wingtips not unlike those used by the AirCam. 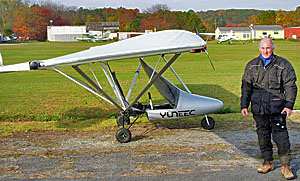 Spark Lamontange, pilot in these photos, was for years a partner in Flightstar Sportplanes. He’s highly accomplished in flying these models.

You’re probably aware of the auto industry’s billion-dollar bet on electric cars. Skeptics are plentiful. Same for airplanes. Despite doubts, even Cessna and Bye Energy are teaming up on an electric 172. Other LSA electric projects are also underway and it’s all good in my mind. *** Most e-powered aircraft remain in the future. Yet here today is the E-Spyder. You can place an order that’ll set you back less than $30,000. Plus it’s a true Part 103 ultralight meaning you don’t need no stinkin’ government license to fly it. *** I wish I lived closer to Woodstock Connecticut where co-developer Tom Peghiny is flying Yuneec’s E-Spyder along with a few trusted friends. The one they’re flying has longer wings and a battery-hiding compartment (top photo, circled). Tom wrote, “We have been flying a lot since finishing the plane in mid September.” So far Tom and team have taken 15 flights on the upgraded version. This prototype (#3) has many changes over the original that was shown at Airventure in 2009. Tom elaborated, “The structure uses a good bit of thin (0.9 mm/.035 inch) 7075-T6 tubing to reduce weight, a carbon sandwich fairing to reduce weight, light weight Mylar laminate Dacron wing covering. He also noted span has been stretched to 33 feet with the addition of the sheared wing tips. *** E-Spyder is much cleaner looking than before. “The battery has been moved to the fuselage to reduce drag and is now housed in a single battery box which slides in and out like a dresser drawer on rollers,” explained Tom. “The battery has additional capacity and uses fewer cells (18) which greatly simplifies the balancing during charging. Charging takes 2 to 2.5 hours depending on the discharge state.” *** Yuneec — which bought the airframe rights from Flightstar to pursue the electric-power project — has developed the motor to further reduce the maximum RPM, increasing the torque which allows a larger and even quieter propeller. *** All cool! But how does it fly? “The lower drag installation and the other changes to the aerodynamics make the aircraft really perform,” noted Tom. “We now have some performance numbers: top speed 52 mph; stall speed 22 mph; cruise speed 35 mph; climb 375 fpm; duration 20 to 35 minutes in calm air.” But for longtime soaring pilots like Tom and me, he saved the best for last, “We’ve been able to soar it in light thermals as it really wants to go up.” *** For green-tech enthusiasts he added one more comment: “We get our electricity from Community Energy which is 80% windmill and some hydroelectric, so we’ve been flying on windmill power.” Huh! Giant windmills power a small windmill (the prop) and man flies. Cool! [Update 10/27/10: Since I wrote the article above, noted writer Jason Paur has also flown the E-Spyder — the lucky guy! — and has written an excellent review. Catherina Centanni took the photos and they are some of the best I’ve seen. I encourage you to go to Wired.com and read this story. —DJ]