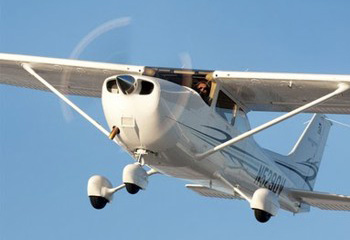 Keeping tabs on Cessna‘s electric C-172 project in collaboration with Bye Energy of Colorado, Bye just announced it will make a presentation at the annual NBAA (National Business Aviation Association) convention this that’s going on right now in Atlanta. *** Bye Energy as I’ve blogged in the past is working on electric and electric-hybrid propulsion systems for LSA and light GA airplanes under the banner of its The Green Flight Project announced earlier this year. *** The latest news is the electric Skyhawk will fly in the first quarter of 2011. *** George Bye, CEO, had this to say recently: “This is an ambitious effort, but we are continuing to uncover additional efficiencies with electric-powered flight,” he said. “We are grateful to Cessna for its continued collaboration and support.” *** Cessna’s head honcho Jack Pelton added: “Bye Energy’s progress toward first flight of the electric Cessna 172 demonstrator is encouraging news for the future of mainstream general aviation.” *** Backgrounder: More than 43,000 Skyhawks have com off the line since 1955. *** The electric version could evolve to a four-hour flight time performance. Reports are, given the sobering realities of current battery technology limitations, the first “electric” Cessna will in fact fly with a hybrid engine (jet-fuel/electric a la Toyota Prius). *** Here’s a video from Bye.