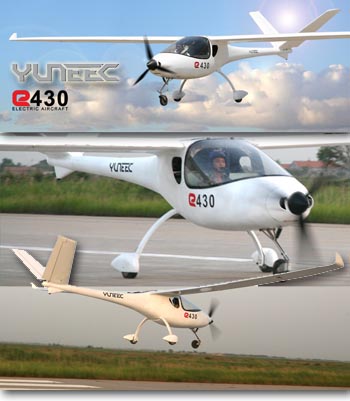 The E430 takes its first flights with Yuneec’s company test pilot, Sun Xun, a 3,600-hour pilot, at the controls for the flight evaluations. (Interesting to note he sat on the right side of the cockpit for this.) For more info, contact Yuneec’s UK office.

Two Chinese delegates attended ASTM meetings in Freidrichshafen Germany in April, the first time the nation has been represented. Those reps indicated they believed ASTM acceptance in China may not be far off. Meanwhile, Shanghai-based Yuneec company is moving forward, and upward. *** Yuneec’s E430 will be featured at AirVenture along with a distinctly American design: the Flightstar Spyder (single place, Part 103-capable ultralight) fitted with a Yuneec electric motor. *** Using a 6-battery setup on their two seater, E430 expects 1.5-2 hours of flight and with such an installation, payload is a respectable 400 pounds even with a 45-foot wing span. A 10-battery setup may fly 2.25-2.5 hours. A video gives a hint to the sound level (turn your speakers up loud). *** Yuneec International announced, “The E430 is a twin seat, single engine, LSA class aircraft designed to be simple to use, easy to fly and with virtually zero vibration. It’s very smooth [with] low noise, no emissions, no [petroleum] fuel, extremely low maintenance and…it’s environmentally friendly.” The company continues, “Charging times of 3 hours for as little as $5 make electric a low cost way to fly.” *** On Saturday June 20th at an Airfield North of Shanghai the E430 performed two flights of around 15 minutes and did a series of basic test maneuvers. Under full power E430 rolled 260 feet, rotating at 40 mph. A climb rate of nearly 1,400 fpm was achieved during the second flight. Top speed in level flight was 94 mph.