April 2017 logged 12 years of Light-Sport Aircraft. The FAA regulation creating the category was introduced in 2004 but it was at Sun ‘n Fun 2005 that the agency presented Evektor SportStar and the Flight Design CT the first and second Special Airworthiness certificates. 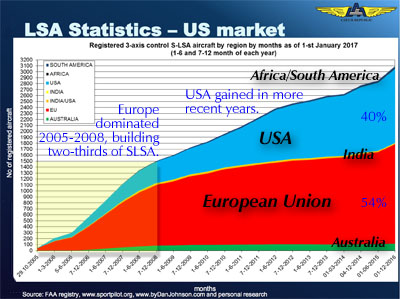 European producers dominated the early days of LSA as they were already producing ready-to-fly aircraft under rules in those countries. American companies most made kits but came up to speed quickly after the SP/LSA regulation was introduced.

My friend and LAMA associate, Jan Fridrich, gave a presentation at Aero 2017 showing many graphs that examine this new airplane sector and how it has developed over the last decade. This article looks at a portion of his analysis.

In those dozen years, the market has developed interestingly.

In the first vigorous years of growth — filling pent-up demand for a two-seat aircraft pilots could fly without a medical — European light aircraft producers dominated the market (chart). Jan’s home country, the Czech Republic, was one of the most prolific, in the early days leading all other countries. Czech designs remain a key player but the field has shifted.

Manufacturers in the USA have significantly caught up with Europe.

Van’s Aircraft, the leading kit producer, joined the LSA party first with kit aircraft after first proving the design met the standard by building one Special LSA. Subsequently, they added a fully-built model of their RV-12 in an allowed partnership with another builder. CubCrafters arrived on the scene later and for a few recent years lead all other builders in annual production. (I’ll post a full 2016 market share report in a couple days.)

In addition to the two above, American producers included companies such as American Legend, Rans, Progressive Aerodyne (Searey), Just Aircraft, Arion, Kitfox, Glasair, North Wing, SilverLight, Quicksilver, and CGS Aviation. For a few years, Cessna looked to be a major player though they subsequently (literally) scrapped the effort. Another American name, Icon, also burst on the scene with the best marketing in the industry and amassing a large number of deposits.

Beyond airframes, American companies have succeeded in avionics, engines, and other gear: Dynon, Garmin, TruTrak, Continental Motors, Sensenich, Guardian, Levil, and others.

In a field a vibrant and innovative as Light-Sport Aircraft, you can expect more development and, it turns out, this can help all of aviation. 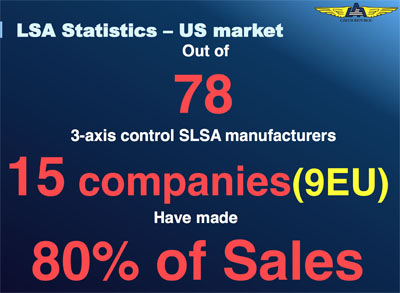 The 80/20 rule applies to Special LSA production as it does in so many other places. Note that this graphic refers only to three-axis airplanes as that FAA database info is reliable. Alternative aircraft such as weight shift trikes or powered parachutes may account for 25% more aircraft in the SLSA fleet.

Indeed, what these charts do not show you is how LSA have affected — and benefitted — the general aviation sector. Let me count some ways.

At Aero and around the USA, general aviation proponents are celebrating the rewrite of regulatory standard Part 23 that, in many pages, lists the requirements to win approval of a “certified” aircraft. The rewritten rules will rely on ASTM industry consensus standards that aim to ease the effort and greatly reduce the cost of certifying an airplane. This new standard relied heavily on the LSA experience and might never have happened had not LSA paved the way.

The new BasicMed rules that allow a pilot to fly a GA aircraft without a medical came about significantly because of the good results of Sport Pilots — or pilots exercising the privileges of Sport Pilot using their higher certificate but without a fresh medical.

In these and other ways, Sport Pilot and Light-Sport Aircraft maintain clear advantages — lower cost, less regulatory burden, the most modern equipment, higher fun-factor — over general aviation. SP/LSA is not going away and one way to be assured of this is the global phenomenon of LSA acceptance in a growing number of countries. Indeed, 2014 statistics show LSA out-delivered GA single engine piston aircraft by more than three to one.

These facts are a good reason to celebrate and continue support Light-Sport Aircraft.