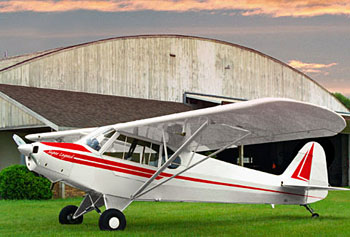 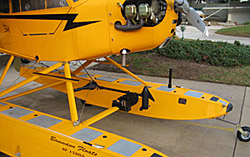 Since the beginning four brands of engines have powered Light-Sport. Rotax holds approximately a 75% share, Continental has about 15%, and Jabiru has about 10% with a couple entries using the HKS. Oh, and one more… Lycoming. *** The truth is Lycoming has literally one or two entries, the best known of which is the Falcon LS, now rebadged as the Renegade. In fact the latter just installed what they say is the first O-233 true LSA engine from Lycoming. *** But the situation seems to be changing rapidly. Rotax still dominates and will for the foreseeable future; their 912 series is a well proven and well accepted powerplant. But here comes Lycoming. Besides the Renegade, Tecnam is now offering the O-233 on their Eaglet. And I’ve heard rumors of more such installations, potentially some backlash on Continental’s transfer to Chinese ownership. *** Announced recently is the new American Legend Super Legend. “Super Legend boasts the same power-to-weight ratio as a 150-hp Super Cub yet qualifies as an LSA,” claims the Sulphur Springs, Texas company, the number three seller among LSA. “A Lycoming O-233 Series lightweight engine supplies Super Legend with 115 horsepower at 2800 rpm and is multi-fuel capable, operating on both 100LL and unleaded automotive fuel,” added American Legend. The O-233 uses dual CDI Ignition, has a 2,400-hour TBO and Legend installs a Sensenich ground adjustable propeller with spinner as standard equipment. Though “lightweight” is still substantially heavier than a Rotax, a very familiar American-made engine may have great appeal among Cub enthusiasts. In other ways, the Super Legend is the same airplane you already know, “equipped with Super Cub-style flaps, 32-gallon fuel system, and balanced tail feathers.” Super Legend also features carbon fiber components to decrease weight, a body-conforming adjustable seat, and optional toe brakes. Standard features adopted from the Legend Cub are its three-inch wider cabin, double doors, and the ability to solo from the front or rear seat. *** What can you do with a Super Legend? My Spruce Creek Fly-in neighbor Ron Bishop loves to fly his AmphibCub on the water and at times to do a bit of fishing. Photos show a portable power unit with battery and depth finder with digital readout to serve this purpose. You can also accessorize with a fishing rod holder. Sound good?