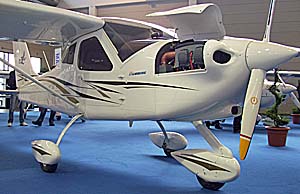 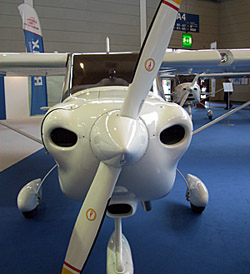 Lycoming under Eaglet’s cowling. Some will see a gutsy look. 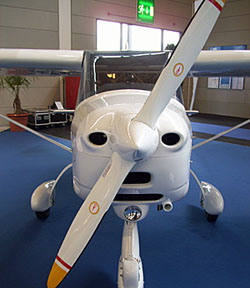 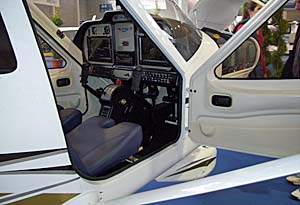 Eaglet has a fresh interior that will please occupants.

While the Continental O-200 engine — used in several Light-Sport Aircraft — attains Chinese ownership, Lycoming appears to be making a stronger push to enlist LSA manufacturers. *** One example at Aero 2011 was the upgraded Tecnam Eaglet, which airshow visitors could compare with either Rotax or Lycoming O-233 power. The appearance difference was significant and may test the market for preference for the European Rotax engine that powers 75% or so of all LSA versus the standard bearer Lycoming that has hauled generations of Americans through the skies. *** A major difference is the air-cooled Lycoming versus the liquid-cooled Rotax. Those big fins to cool the Lyc’ demand what one Tecnam rep’ called “power bulges.” The effect on the nose cowl surrounding the engine is dramatic and I’ll bet pilots like one or the other better… which is exactly the point. Tecnam will continue building both so you can — as Burger King puts it — “have it your way.” *** The company has also upgraded the interior of the Eaglet, launched at Sebring 2009, with a highly finished interior complete with new interior door treatments (photo). In sharp contrast to the bare bones Cessna Skycatcher (but on par with some other LSA models), the Italian company’s work results in a handsome cockpit that is much more user friendly. *** Tecnam mounted what I perceived to be the largest display of all Aero 2011’s 630 exhibitors. They filled a large, very professional exhibit with a dozen aircraft running from the Eaglet to the new four-place P2010, a military version of their Twin, and a mockup of their 11-seat regional airliner (more on these and other larger aircraft from LSA producers in a future SPLOG post). Tecnam had so much to talk about, they held three press conferences; their work represents a huge amount of development in the last few months. In their press announcements, Tecnam reported selling 210 single engine aircraft plus 55 of their dual-Rotax Twin… all during 2010, which as every knows was a miserable year for aviation and most other industries. In a word, IMPRESSIVE! *** I need more time to report all the news and photos I gathered at Aero but intermittent Internet connections will have these following as I can get online. Please keep returning for more news from another fantastic and fun Aero 2011. Also, thanks to all the European readers of ByDanJohnson.com — I got many positive comments and discovered that many overseas readers are regular visitors.