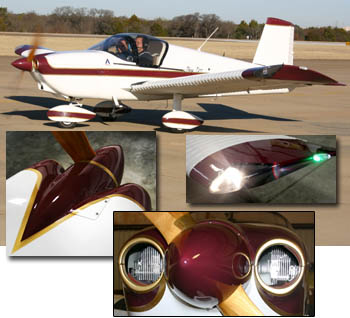 Painted in a more conventional, but tasteful, scheme, this Thorpedo shows the smoother lines of the LP series from IndUS. The nose cowl was radically resculpted and the wing tips were dressed up for night life.

IndUS marketing geniuses called their program “Refresh ’08,” but perhaps it ought to be “Renew ’08?” The changes on which IndUS staffers have long labored gave the proven design its smartest look yet. Here’s a neat trick for what may be the oldest SLSA design in the fleet, what with Serial Number One T-211 turning 61 in 2007 (“and it’s still flying all over the place”). *** In January 2007, IndUS announced a partnership with LoPresti, the Speed Merchant people who helped Piper and several other GA brands extract more performance from their airplanes without airframe modifications. IndUS left the partnership but a clever team at the Dallas company took up the innovation effort and produced impressive results. *** The Thorpedo shown at Sebring 2008 sported a snazzy new engine cowl treatment, light-emitting wing tips including built-in landing lights, and streamlined gear leg fairings. Comfort factors included renewed boarding steps and seats lowered to accommodate tall pilots. IndUS has been pushing to improve fit and finish and the fleet the Texans brought to Sebring were the best iterations I’ve seen for this venerable design — which back when led to the Piper Cherokee series (do you see the familiarity?).