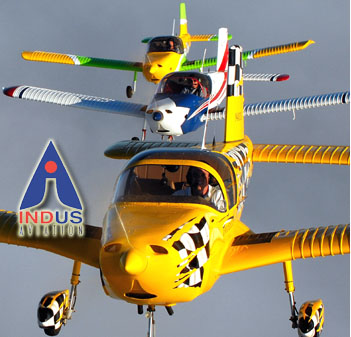 IndUS wants you to imagine you’re flying the lead Thorpedo of four sold at the Sebring LSA Expo. You’ll have to go to the show to make that happen. Welcome to a new year for LSA!

We’re barely two weeks away from the season-launching Sebring LSA Expo. As 2007 ends and companies prepare for 2008, new models will be on display at Sebring and upgraded versions will further entice consumers. Among the latter are two refreshed models from Texas-based IndUS Aviation. *** Marketing man Scott Severen sent a long list of alterations made to the all-metal Thorpedo LP120 and LP85. They incorporate IndUS-completed aerodynamic refinements (new engine cowl, wing tips, and gear leg fairing) plus canopy styling and wear improvements, new boarding steps, new lowered seats for taller occupants, electrical system upgrades plus several interior or ergonomic refinements. Other updates focus on comfort and safety. It shows IndUS has been listening to customers and acting on that knowledge. *** Severen says IndUS will be at Sebring with no less than 8 aircraft. And bringing this fleet allows IndUS to make an unusual offer: Upon completion of signed purchase order and a $5,000 deposit, the aircraft of customer’s selection at the show will be flown free of charge to the customer’s home airfield by one of Severen’s sales team. IndUS will have four airplanes for immediate delivery under what they’re calling the “Show and Go” program. Prices range from $75,000 to $132,000.