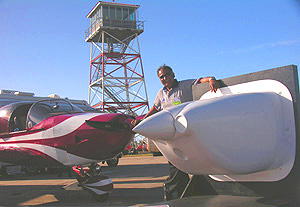 IndUS owner Ram Pattisapu poses beside his Thorpedo with a mockup of the new nose cowl designed for the Dallas-based company by LoPresti Speed Merchants. Read my Thorpedo report.

How to extract more performance from a 60-year-old design? How about a nose job? Pilots understand a smoother shape lends more speed to a design, but you may not sense the total gain possible without adding horsepower or burning more fuel. General aviation companies like Mooney, Cessna, and Piper hired LoPresti Speed Merchants to help boost speed. *** At the 2007 Sebring LSA Expo IndUS Aviation revealed a new LoPresti nose cowl for their Thorpedo LP; plus reshaped wing tips which enclose nav and landing lights plus strobes, and new landing gear fairings…which, being Texans, they called “cowboy boots.” LoPresti engineers say the streamlined improvements will boost Thorpedo’s speed near the LSA limit of 120 knots. A 75% power cruise gain of 20% is forecast. The new components modernize the lines of this venerable John Thorp design from the 1940s, though it may seem hard to improve on a airplane that never required a single Airworthiness Directive!