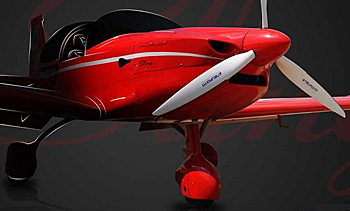 Sling is an all-metal low wing in two and four seat variations. 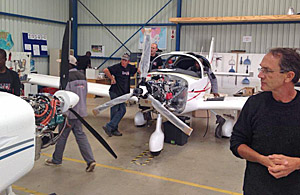 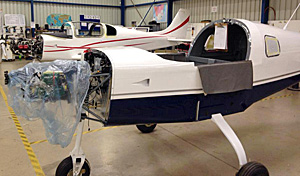 Slings being assembled for delivery. 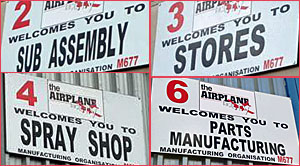 A few of the seven hangars where Sling aircraft are packaged (as kits) or assembled ready-to-fly.

Welcome to summertime … in December, just after Christmas?!? True, down under in Australia or partway around the southern hemisphere in South Africa, weather patterns are roughly opposite of those in the northern half the globe. While it is presently cool or cold where many readers live, perhaps it is of interest to take a tour of a down-under manufacturer, in this case South Africa’s The Airplane Factory (TAF), designer and manufacturer of the Sling series of Light-Sport Aircraft, four seat models — some built ready to fly and some kits. In case you may have forgotten, the two seat Sling that now qualifies as a LSA was bravely flown around the world shortly after it was introduced by partners and frequent very long distance pilots Mike Blythe and James Pitman.

TAF’s American representative is The Airplane Factory USA. The California-based importer’s main main, Matt Litnaitzky, recently visited his supplier, snapping photos and giving us some additional insight to the organization behind the Sling series. Matt summarized, “[TAF] is really quite an impressive operation, with over 120 people working! They deliver five ready-to-fly aircraft a month, a mix of Sling 2 and Sling 4 aircraft, which they can deliver ready-to-fly.” Sling 2, or simply Sling to most Americans, is the Light-Sport Aircraft version that we’ve seen at U.S airshows and about which I’ve written. Sling 4, which has also flown long distances, is the company’s four-seater. Along with a handful of other LSA two-seat aircraft manufacturers, TAF is one of those companies that are emerging into the Type Certified or kit aircraft classes with larger aircraft. Besides following the LSA and light kit aircraft industry closely, we’ll be keeping an eye on this new, potentially disruptive influence in aviation. What with four seat Cessna and Cirrus aircraft pricing well beyond half a million dollars, the field appears ripe with potential for some new suppliers. More on this as it evolves.

Headquartered at Tedderfield Airpark in Johannesburg, TAF occupies a series of well organized hangars. Matt wrote, “The factory takes up seven hangar rows, with [one] for each of the manufacturing steps (composite photo). The parts manufacturing hangar does punching, routing, and bending of parts, The stores hangar holds all the manufactured parts and is where kits are packed. A sub-assembly area is where fuselages, wings, fuel tanks, and empennages are assembled after aluminum components are alodyned. TAF has a composites shop, where those parts including landing gear are fabricated. Then, parts are sent to the spray shop where body work is done and parts are painted. Finally, a final assembly hangar brings all the elements together, upholstery is installed, engines hung, and avionics installed.” Update 12/30/13 A few days after this article was posted, Matt provided this count: “approximately 100 airplanes flying, and over 180 total ordered, mostly in South Africa, but others in USA, Australia, Europe, and other parts of the world.”

When Matt returns home, he works with Ryan Ruel to prepare Slings for delivery to American customers and the pair have also been assembling a Sling from kit form. Beyond the airplane distribution — note that Matt has also been active with weight shift aircraft, or trikes — a sibling business is MGL Avionics. The electronics enterprise has a full line of avionics for use in any kit-built aircraft including Experimental Amateur Built (51%) kits or Experimental LSA (where the owner may add such equipment as he or she wishes after first creating a fully conforming ELSA that matches the SLSA the factory builds. (If this is not fully understood our video may help explain the difference among the alphabet-soup abbreviations.) Matt and Ryan are ambitious fellows whose work produced a solid year in 2013. Look for them at an airshow near you and take a Sling demo flight if you can; you’ll get to use the MGL avionics at the same time.