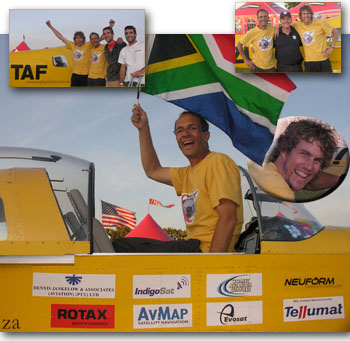 Welcome to Oshkosh! Mike Blyth and James Pitman arrived safely at AirVenture 2009 flying their handsome D6 Sling Light-Sport Aircraft. Above: Mike waves the South African flag with the U.S. flag in backdrop and their sponsors emblazoned on the fuselage. James Pitman (right) is Mike’s partner in The Airplane Factory, manufacturer of the Sling. At top the duo pose with South African good friends and even yours truly.

For most pilots flying 100 hours represents a decent year of enjoying aviation. Mike Blyth and James Pitman hit that on the first long leg of their ’round the world flight, traversing a huge expanse of ocean en route from South Africa to Oshkosh. Their total flight will see each logging nearly 250 hours of flying… in a month! *** The intrepid duo successfully arrived at AirVenture Oshkosh right on schedule. After spending a few days at this “Disneyland for Airplanes,” the pair of global adventurers will set off for California, Hawaii and the far east as they wing their way back to what should be a heroes’ welcome in South Africa. Blyth has accomplished several impressively long flights and has made movies about the experience. He and Pitman will repeat with “Sling 2009 Around the World” aerial expedition. These are no mere “There I was…” films. Many (including me) have found them highly entertaining. *** In answering my query about why east to west (given that prevailing U.S. winds are west to east), Mike explained that “ocean tradewinds favor going this direction” when flying major portions south of the equator. Not many pilots comprehend the amount of planning and preparation required for such an adventure. Who could not be impressed, especially all we other pilots who tend to worry about straying too far from a good landing area. Go Mike and James; bon voyage for the rest of your fantastic circumnavigation!