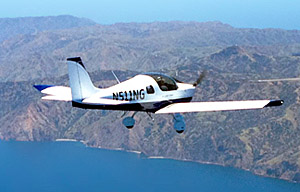 The Airplane Factory Sling is the newest SLSA but flies like one thoroughly developed. 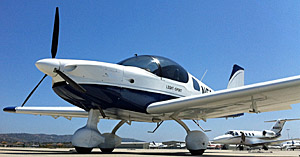 Sling is an all-metal construction designed in South Africa. 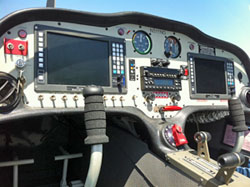 This particular Sling is loaded with the MGL Avionics suite plus back-up analog airspeed and altimeter. 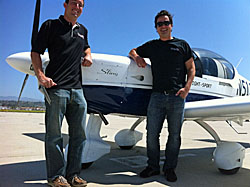 *** While out west on business travel I had the chance to fly the latest SLSA on the List, the South African Sling. Earlier I’ve written about the all metal LSA’s round-the-world flight but now this low wing design is being made available for sale to Americans.

*** On a gorgeous Southern California day, Matt Litnaitzky and his associate Ryan Ruel took a 25-minute jaunt from the Torrence airport to the Camarillo Airport in Ventura. (This compares marvelously to a good hour and a half drive on the seemingly endless and always crowded L.A. freeway system.) Ryan cooled his jets in the Waypoint Cafe while Matt and I went aloft in silky smooth air to see how Sling turned out. In a word: beautifully.

*** Handling on the newest LSA is clearly the product of careful engineering and a patient development schedule. In particular, control harmony was up with the best I’ve flown. I was able to execute roll-reversing Dutch rolls to 45 or 50 degrees each way within the first few swings of the joystick. I do these early in an evaluation flight as they tell me in minutes what to expect and the maneuver confirmed Matt’s prior assurances that designer Mike Blythe had done his homework and CADwork well. You won’t have to experiment to find the ideal combination of stick and rudder coordination to look good (and maintain full control).

*** Stalls proved to be non-events that broke so modestly as to be hard to distinguish following a substantial warning of stick shake and airframe tremble. After a Hercules C130 and a multi-engine military jet passed well underneath us — believe me when I assure you we checked very carefully for traffic after that — I did power on and off stalls plus turning accelerated stalls. In every single case Sling behaved very properly, dropping only the high wing and only once tightening (to the left under power) only slightly and briefly despite my holding the stick full aft.

*** Steeps turns at around 60 degrees of bank held the curve well enough to find our own wake after a modest power addition. Longitudinal stability checks found Sling consistently dampening the up and down oscillations following a modest push- or pull-and-release action. Clearly, I found much to admire in the Sling.

*** Like Breezer and Alto 100, Sling uses a sliding canopy that allows a refreshing flow of air during taxi and an easier escape should you find yourself upside down in a water ditching (God forbid).

*** We did a couple landings at Camarillo and I stopped at two since both were good (the first one a true “squeaker”). After that performance I didn’t want to ruin my unblemished record. Matt was kind with a compliment but Sling simply lands well when you follow Matt’s admonition not to raise the nose to the sky on final flare. I flew a fairly hard slip to lose altitude on the second trial and this worked well but Sling’s flaps are best as they don’t affect pitch when deployed.

*** In all, Sling is a great addition to the many wonderful choices facing someone shopping for a Light-Sport. Watch for a full pilot report and see Matt and Ryan at Oshkosh in a couple months.