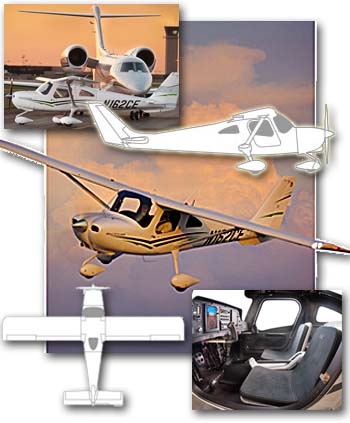 Cessna’s first China-built Skycatcher arrives. The drawings reflect an earlier version (hint: note the tail volume in the drawing versus the photo). Also, curious…compare the size of a single engine nacelle on the Citation jet compared to the entire Skycatcher fuselage. More Skycatcher details.

It begins! The long awaited arrival of Cessna into the ranks of Special Light-Sport Aircraft has begun, with the first Shenyang-produced Skycatcher arriving in Wichita. The company reports taking more than 1,000 orders. At Oshkosh 2009, company officials said production would commence as originally planned in 2009 but that 2010 will be the year of substantial deliveries from their Chinese contract manufacturer. Soon, we’ll begin to see registered Skycatchers show up on our market share reports. *** Magazine reporters started to gain access for evaluation flights, though the first of those occurred on a slightly overweight prototype. Initial reports were positive, mirroring comments from Cessna managers who have gotten to fly the prototypes. Performance and payload are factors sure to be gauged by additional flight reviewers as production versions become available. So far, flights have occurred on the #2 prototype that was rebuilt after an incident following spin tests; that aircraft landed under parachute canopy and did not sustain major damage. *** As Cessna (along with most other producers) absorbs the punishment of a shriveled bizjet market, the Skycatcher is welcome bright spot. Cessna VP of Communications, Bob Stangerone — one of the lucky fellows who has flown Skycatcher — was reported as saying, “Modifications will need to be made to the first 10 or so Skycatchers after they arrive until design changes can be incorporated into the production line.” Design changes include increasing the size of the tail, adding a ventral fin, and lengthening the rudder.