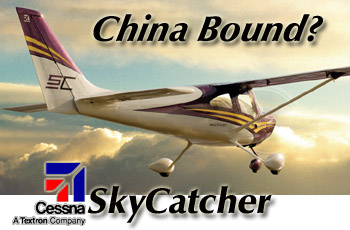 Read opinions of individuals expressing themselves regarding Cessna’s China plan for Skycatcher. The Wichita giant is taken to task by many writers, but I admire Cessna’s willingness to air these messages in a public forum. VP of Marketing Tom Aniello prefaces with the company’s view of the decision.

Details continue to emerge regarding Cessna’s plan to have the Skycatcher built in China. After fabrication, assembly, and flight test north of Beijing, Skycatchers will be partly disassembled and packed in containers for ocean shipment to the USA. Cessna CEO Jack Pelton indicated that at least three of Cessna’s authorized service centers, including one in Wichita, will reassemble their LSA in the U.S. for delivery to retail customers through Cessna dealers. *** In addition to reducing Skycatcher production costs, Pelton was reported saying the Chinese agreement is advantageous for Cessna because, “we didn’t want to lose focus” on the more profitable business jet market segment while ramping up the infrastructure necessary to build the LSA. *** Shenyang Aircraft will start work on tooling for the Skycatcher in 2008 and could start initial manufacturing operations late next year or early in 2009. Pelton believes Shenyang will have 400-500 employees working on Skycatcher when it reaches full production, forecast at 700 Skycatchers per year. Initial production rates will be closer to 150 to 200 aircraft per year, he said, then ramping up. *** Pelton said the Shenyang agreement does not include any Skycatchers for the Chinese market. But Chinese officials have already bought more than 100 Cessna Skyhawks for flight training.