Not only does SeaRey have a showroom at their new headquarters, they have hangar space and a builders area for customers. 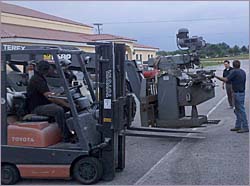 Progressive Aerodyne was aided by “dozens” of owners as they moved lock, stock, and barrel to their new factory. They were up and running in eight days! 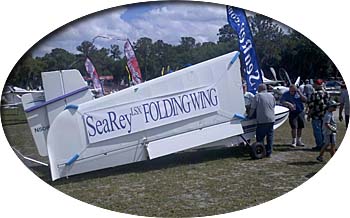 As the SLSA SeaRey works toward certification, a folding wing became part of the attraction.

Recently, I blogged about a Tennessee town that welcomed Skykits from Canada, providing a brand-new facility for them to use. A town in Florida also saw the potential of a light aircraft manufacturer and had a new building with lake access available. *** Arguably the most successful light aircraft seaplane producer is Progressive Aerodyne and their SeaRey amphibian. How successful? In January, they delivered SeaRey kit #500 to its owner in Belgium. That impressive number doesn’t tell the whole story, which centers around the tight community of SeaRey builders who often help each other and not solely with builder questions. In my years in aviation, I’ve never seen a closer group but then, as a fellow seaplane lover, that doesn’t surprise me; seaplane aviators share a common bond. Now, the SeaRey team is working hard to finish their SLSA version, giving enthusiasts a chance to buy a ready-to-fly SeaRey or a kit. *** Recently this company moved from its longtime location to a new facility. The old quarters were not on an airport or near the water. For a kit producer that was fine, but as Progressive Aerodyne heads toward fully-built production, it’s far better to have a place you can fly the airplane that just rolled out of your factory. *** Several SeaRey customers helped buy the building, then physically aided the relocation effort to Tavares, Florida, a town about 45 minutes north and west of Orlando in what is often called the “lakes district” The reference becomes obvious when you look at a map of central Florida; ideal for a seaplane producer. SeaRey marketing chief Darrell Lynds reported, “Tavares has aspired to become the largest seaplane base on the East Coast. The town just completed a $7 million seaplane base, marina, and park.  It will also feature premium auto gas and 100LL fuel stations. We approached them a year and a half ago about who we are and what we do. Right on the spot, the city leaders piled us into cars and drove us to this new building on State Route 19. We were stunned. The layout of the building, access to the shoreline, and distance from all other dwellings made it perfect for a SeaRey factory.”