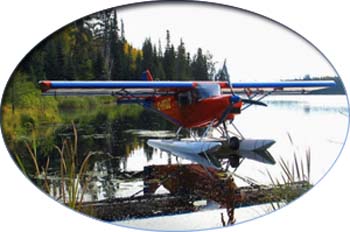 With short take off aircraft and composite amphibious floats, Skykits is ready to capitalize on the popularity of float flying. 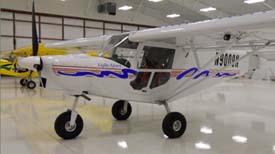 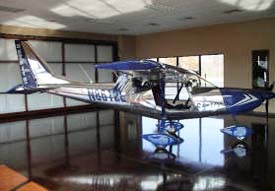 Skykits’ newest Rampage is shown inside the company showroom.

In the endless tree-covered rolling terrain of northwestern Tennessee resides a Canadian manufacturer of Italian aircraft. Welcome to Skykits, producer of two models of Savannah, a STOL (Short Take Off and Landing) design from ICP of Italy plus a newer variation of ICP’s Vimana, which Skykits calls Rampage. *** Starting out in his native Canada, Eric Giles found a willing Tennessee community offering incentives if he set up shop at the local airport. Housed in a new facility (photos), Skykits ranks in the top 20 producers that generate about 90% of all SLSA registered to date. *** After ASTM-certifying four models Skykits offers three today: Savannah VG with vortex generators replacing earlier fixed leading edge slots; Savannah VGW, the VG’s larger brother done in wide body form (“47 inches plus bubble doors”); and Rampage with electrically-deployable leading edge slats mated to Fowler flaps. The result of the latter effort, said Skykits, is “an airplane that will cruise at 115 mph yet land and takeoff in under 200 feet!” Indeed the company quotes takeoff over a 50 foot obstacle at just 319 feet. Go ahead and compare that to most LSA, though many can run significantly faster than the 100-knot cruise of Rampage. *** Skykits also sells the Savannah models in ELSA kit form and a carbon and Kevlar amphibious float system. *** An important distinction of Skykits airplanes are modest prices. In ready-to-fly form with 100-hp Rotax 912 engines, three-blade props, and basic panels, prices range from $74,000 to $85,000. No wonder the Paris company logged four sales at Sun ‘n Fun 2010. [UPDATE 5/12/10] On a factory visit today, Eric Giles spoke about the excellent support he has received from the town of Paris, Tennessee including the mayor, airport manager, and other officials. His leased 21,000 square foot building is brand-new and a huge parking apron out front were provided as an incentive to encourage him to relocate from Canada. I’m always pleased to hear of such a warm welcome for a LSA company.