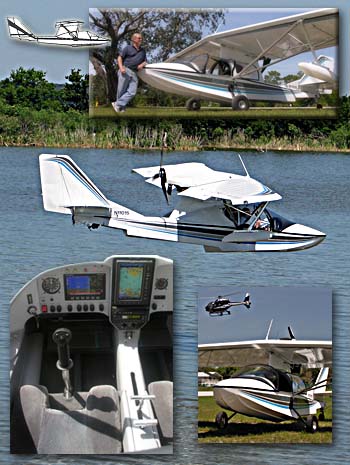 American Seaplane — SeaRey is an all-American brand making the move from a kit-only operation to one providing fully-built SLSA and, eventually, ELSA kits. Watch for my full pilot report in the October 2009 Light Sport and Ultralight Flying.

We sit on the edge of hitting triple digits of Special Light-Sport Aircraft. Just before Oshkosh started, Van’s Aircraft announced their RV-12 qualified for SLSA airworthiness (which also allows the Oregon company to sell ELSA kits). People have started to ask, “Who will offer Number 100 SLSA?” One possibility is the SeaRey from Progressive Aerodyne. *** SeaRey marketing man, Darrell Lynds reported a spectacular Oshkosh event, “We sold 11 kit SeaRey aircraft (the LSX) and four SLSA versions to be called the SeaRey Sport.” That represents quite a performance, causing me to inquire what amount of money changed hands in order to call these an order. “We collected $5,000 toward a kit and $10,000 on a fully-built SLSA,” explained Darrell. I’d call that enough cash per airplane to make for genuine orders. *** I spoke with many sellers at Oshkosh who reported “very solid leads,” and “genuinely interested buyers,” but a few complained that despite these positive comments, they were not seeing the cash. *** SeaRey logged one of the best selling performances among LSA suppliers. The company has been working on LSA approval for several months and that follows years of successful kit selling. Close to 500 SeaRey kits are now flying and they’ve generated an intensely loyal following. Could the SeaRay Sport be SLSA #100? Only time will tell but we’ll do our best to report the answer first.