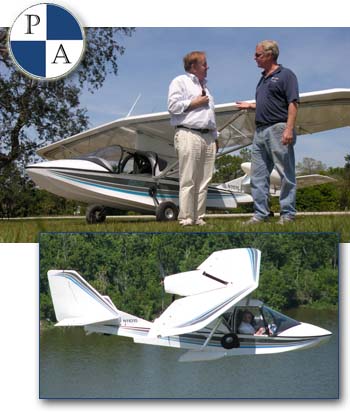 Aiding designer Kerry Richter (R) is Damir Blazevic, a German engineer now residing in Fort Myers with impressive credentials including work on the giant Airbus A-380. Kit prices start at $29,900 yielding about $60,000 once instrumented, painted, and powered by Rotax 912S. Ready-to-fly SLSA models will start at about $95,000 (not announced yet). See SeaRey LSX at the Sun ‘n Fun 2009 LSA Mall just inside the entrance gate.

Seaplane enthusiasts comprise a niche of American aviation but are some of the most passionate of all powered aircraft pilots. Among these, owners of almost 500 SeaRey aircraft belong to one of the tightest knit communities I’ve seen. Kerry and Wayne Richter, the son and father team that gave birth to the SeaRey (and several other models) have quietly built one of the strongest brands in light seaplanes… and now they are moving into the Special Light-Sport Aircraft space with their new LSX. Kerry says the new model, while visually similar to earlier SeaReys, possesses no fewer than 78 new or revised features including a custom interior and complete rework of the panel. *** I flew with Kerry in the new machine from my Florida home base at Spruce Creek Fly-in. We hopped LSX over to a nearby lake and Kerry executed a couple perfect water landings. Taxiing back is equally exhilarating with SeaRey behaving like a powerful speedboat. The “swept V-hull” cuts the water more smoothly than any seaplane I’ve flown. Stalls are extremely docile and this seaplane’s speeds are impressive at better than 100 mph. Both qualities are aided by small, clear vortex generators along the leading edge. — UPDATE April 12, 2009 — A clarification: SeaRey’s LSX model will be the company’s entry as an Experimental LSA (ELSA). Their fully built SLSA model will be called SeaRey Sport. The ELSA model is relatively rare, given the industry’s muted response to-date on the concept of a kit LSA that can be 1-99% completed by the factory. While a mostly done kit won’t save much, it allows more flexibility regarding owner maintenance and modification.