We have a new year upon us. With our new reporting capabilities for LSA and SP kit market shares, we can now quickly report results from 2019. 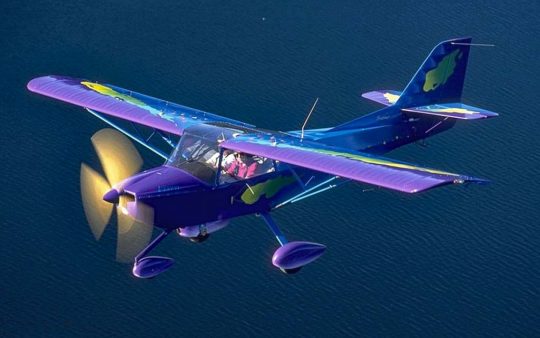 A huge thanks to our supreme “datastician,” Steve Beste for making such swift and accurate reporting possible. I assure you that I’ve looked high and low for every year LSA have existed to find no comparable information.

As always, be advised that our data comes from FAA’s aircraft registration database. That means it is impartial — hopefully meaning reliable and dependable — but it also means some massaging of the information is needed to be completely accurate. (See this article for more detail on the effort involved; it is not trivial.) Steve’s valuable ability to manipulate database resources combines with his knowledge of light aircraft to make an unbeatable combination.

As much as any data allows — and as the saying goes… “you can take this info to the bank.” It’s solid! 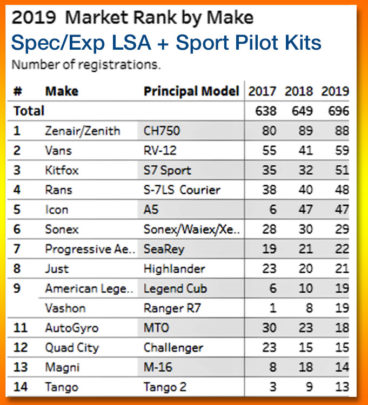 Overview — Here’s the top line view: “It’s been a good year,” wrote Steve, as he noted aircraft registrations for our categories grew by 793 aircraft in 2019, a 10% increase from the year prior. Counting all types, the fleet enlarged from 8,028 at the end of 2018 to 8,821 by end of year 2019. While not as boisterous as the stock market was last year, this nonetheless suggests satisfying numbers for the light aircraft industry.

Compared to 2018, Steve observed, “Sport Pilot kit aircraft are gaining on LSA though not by much; the kit market slightly closed the gap with the LSA market comprised of both Special, fully-built LSA and Experimental, kit-built LSA.” Sport Pilot kits do not meet ASTM standards but have less regulations and the owner, having built his or her plane, is allowed to maintain it without oversight by an A&P.

As Steve uncovered, the market leaders involve the same seven brands that have been leading the pack. 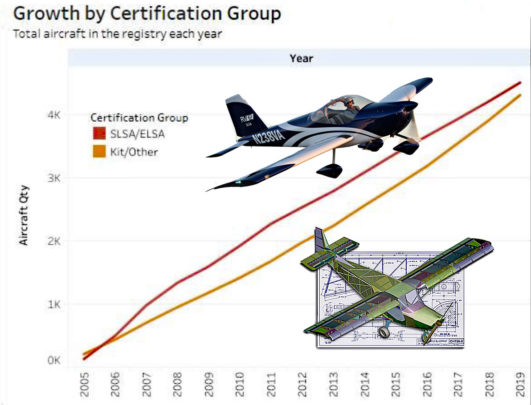 However, as he added, “All did not have the same experience. Kitfox registrations increased by 60% (as the Idaho company appeared to lose some momentum in 2018). Van’s Aircraft grew by 44% and Rans by 20% but  Zenair/Zenith and Sonex were modestly off their previous pace (see chart below).”

LSA Seaplanes — Icon continues to do well (but see the next paragraph). The last quarter of 2019 was good for SeaMax and Super Petrel. The latter gained two new owners in the last quarter while SeaMax gained three. Both companies are based in Brazil but SeaMax has been working hard on their U.S. presence (see more here) and, apparently, it is paying off. 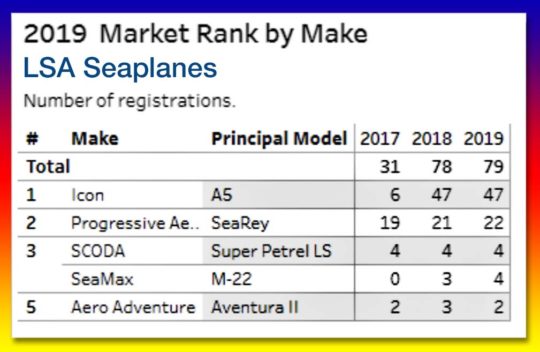 Steve wrote, “Regarding Icon’s numbers, note that historical figures often differ from what was previously reported,” in this case with Icon and its A5. He continued, “This happens because FAA continues to perfect its data. For example, for 2018 the agency reported 57 Icon A5s as ‘2018’ aircraft but FAA data clerks switched 11 of those to ‘2019’ once their late-in-the-year paperwork was done. Thus, we now report fewer than 57 Icons for 2018.”

Despite these necessary adjustments, we maintain the figures used in this report are the best available and are of very high reliability. In fact, the adjustments Steve and I make are proof of the effort to report accurate, dependable data.

As always, I offer a loud and heartfelt THANKS! to Steve Beste for his work to make this information available.

Alternative Aircraft
(all other than Fixed Wing) 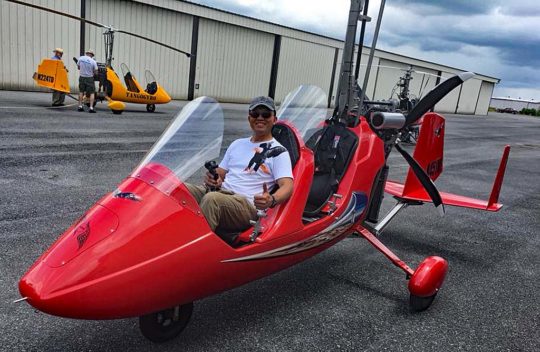 Gyroplanes — “The low-cost Tango is coming on strong,” said Steve. Tango is quoted quite well equipped for just $43,500. “It used to come with a Rotax 582 but their website says it now has a Yamaha engine that they say provides a four-stroke, three-cylinder, fuel-injected, 1,055 cubic centimeter engine outputting 130 horsepower.” That engine is part of the low price tag but even if you added every option shown on their website, you still might not break $50,000. No wonder it is attracting some attention. Of course, until the FAA’s new LSA regulation comes out, all gyros — other than AutoGyro’s Primary Category entry — must be built as a kit. (See chart below.)

Steve notes a new gyroplane entry, “The database now shows Airgyro and their AG-915. It’s a derivative of the Celier Xenon obviously, but with many changes.” 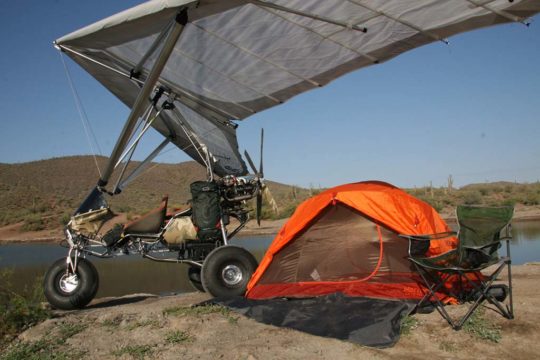 Weight Shift Trikes — Looking only at the weight shift trike segment, Steve wrote, “Something strange is happening.” He clarified, “Evolution Trikes, a leading producer of trikes, registered none of the top-end Revo models in 2019. Instead, the Florida company’s hot models are designer Larry Mednick’s Part 103 Rev and his new RevX (2 registrations). Larry told a prospect at Oshkosh that he’s back-ordered for months on both of them.” These two models don’t appear in the data we collect because Rev is a Part 103 vehicle and RevX is a single-seat machine that we are not counting as being LSA-like. That shows a bias against single seaters, which we never intended. All aircraft on our SLSA List are two seaters. We will start to include single seaters in the future, though we have no way to add Part 103 vehicles because they require no N-numbers.

“Wild Sky’s Goat by Denny Reed has done well,” exclaimed Steve! “What on earth are those Goat buyers doing with them? Could they all be flying back country,” he asked? Our earlier report and video will tell you more about this trike entry. 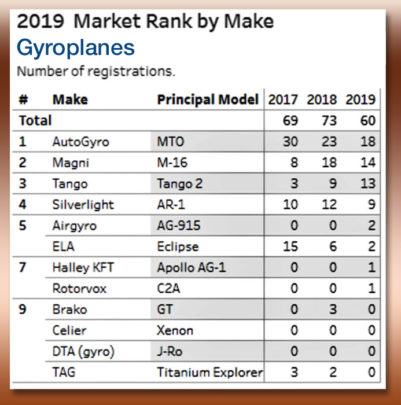 ** When using our online market share reporting system called Tableau Public — please do have a look; it’s free! — be advised this website may appear best on your desktop or laptop. Smaller screen smartphones and tablets do not portray the information as conveniently.