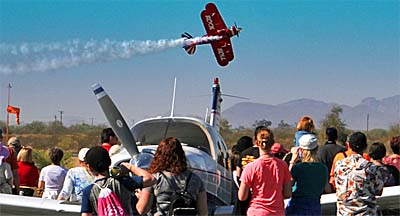 The Copperstate airshow is on in Arizona! Put on by a new combination of Copperstate leadership in cooperation with the town of Buckeye Arizona — which has been hosting its own Buckeye Air Fair — the new event is off and running in its new time slot of early February. For most of its 46-year-long life Copperstate has been in October. Showing the city’s support, both Buckeye’s Mayor and Vice Mayor were present at opening evening ceremonies. Some 20,000 people are expected.

Videoman Dave and I are on-site and working. We’ve already captured a few new interviews for you. On Day 1, one aircraft in particular caught our eyes. 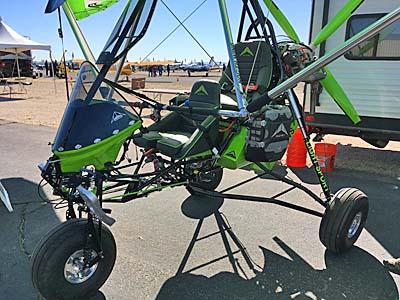 In many years of reporting on light aircraft, I have flown a lot of weight shift control trikes. I love flying trikes. I’ve flown simple ones, super-deluxe ones, tough ones, and ones that weren’t so tough. Most I enjoyed.

Yet I’ve never seen one built so sturdily as Wild Sky Aircraft‘s Goat. This is one beefy, big-boy trike.

This flying machine also escaped my ever-searching radar scan for new Special Light-Sport Aircraft approvals. Having just added it to our list since arriving in Arizona, Goat clocks in at #148 on our popular SLSA List.

“Denny Reed, owner of Wild Sky Aircraft, is an amazing engineer who for years looked for a really heavy-duty adventure aircraft,” said Sid Lloyd of Kestrel Aviation Services. “Finally he gave up and decided to build the ultimate adventure platform himself. With over 8,000 hours of instructor time in trikes, he knew exactly what he wanted.”

Sid sells aircraft from Flight Design and Aeroprakt plus Wild Sky and runs the builder-assist center for Goat kit assembly at his operation near Sedona, Arizona. While Wild Sky has SLSA approval and can fully build, Denny said he prefers his customer build their own kit. 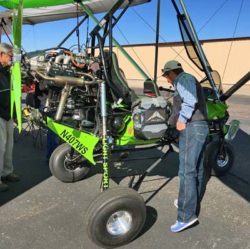 “Talk about heavy-duty, this is simply the roughest, toughest Weight Shift Control (WSC) trike in the world,” said Sid. After my own close look at Goat, I cannot dispute his description.

“Our impact testing exceeded 6 feet high at maximum gross weight in several configurations & trajectories,” explained Denny. ASTM requires that a trike be dropped in various ways including nosewheel first …but from 16 inches, not six feet. I’ve seen these kinds of tests; they are very demanding of an airframe.

“Finally,” Denny added, “we focused on short take off & landing (STOL) with emphasis on being easy to setup & transport coupled with “easy-to-fly.” 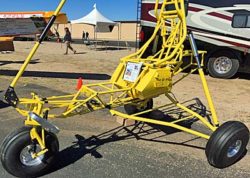 “Goat is one of a kind, said Denny. “It doesn’t need special care. It is not fragile. It just needs good fuel, your respect, and a little love once in a while. If anybody can build something better, we’d like to be your first customers. Until then, we’re looking to build our team of true adventurers. We hope to share what we’ve learned & hope to learn from you too.”

“After all, aviation is not about the planes, it’s about what you do with them.” Who can argue with Reed’s logic?