The appeal is obvious. What pilot doesn’t like the idea of flying faster? Even those of us who enjoy low-and-slow Part 103 ultralights remain intrigued by the idea of going fast, eating up the miles en route to a destination. [Article updated 5/31/21 with additional information. —DJ] 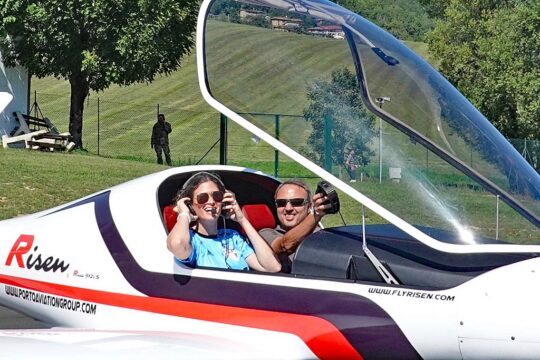 Alberto Porto put a smile on the face of Troy Jones’ daughter after flying in Italy.

Since I first saw this aircraft when it was unveiled to the world at Aero 2015, I have kept my eye on Risen. It was clear this design was going places… literally.

I used a bit of English humor in the lead photo saying “Risen Shine,” meant to play off “Rise and shine,” a get-out-of-bed-and-get-to-work phrase common in the U.S. The truth is, you don’t pronounce it RYE-sen. Porto Aviation Group marketing man Stéphan D’haene clarified that they say REE-sen.

However you may say the name, Risen is one ripping-fast aircraft. Below you’ll read about its latest speed record but Americans may be interested to hear the first example is now tearing up the skies over Montana.

At the end of 2020, on December 10th Porto Aviation Group celebrated an accomplishment: “We got the first ‘November’ tail in the air.” They refer to a a Risen with N-numbers on it as the first U.S.-registered model in America. 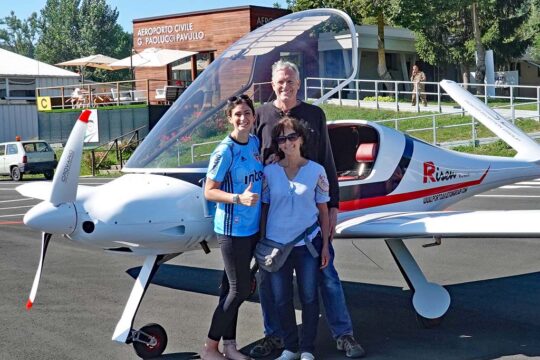 A family that flies together, visiting Risen at its home airfield.

Their launch customer is a long, tall medical doctor looking for a fast, efficient, and economical commuter and travel aircraft. “Troy Jones was exhausted with long car drives and hotel overnights,” said Porto Aviation. “He preferred to fly his own aircraft so he could get home to his family by end of day.”

Jones stands 6 feet 9 inches so finding an aircraft that could accommodate his tall frame was not easy. After discovering Risen, Troy emailed with designer Alberto Porto subsequently booking a trip to Italy to see if he actually fit.

According to Porto, Risen has “a fully modular cockpit that can be adjusted to any owner requirements.” They believed the sleek aircraft could easily accommodate a pilot of Troy’s height. It did and a purchase was arranged.

In 2019 and early 2020, before Covid, Troy spent time in Italy building his Risen using Porto Aviation’s building-assist program. His family joined him, enjoying the beautiful surroundings of Lake Como and the Italian Alps while Troy worked on his aircraft. Porto is located near the Swiss/Italian border. 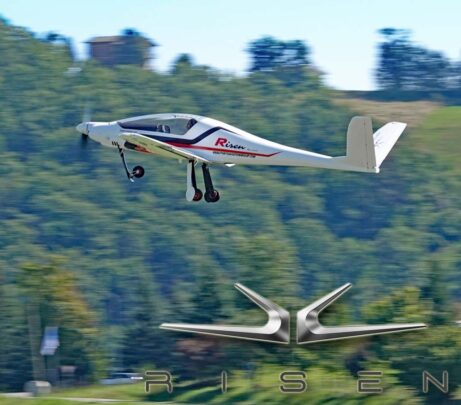 As summer 2020 arrived, the building was completed and Porto Aviation finished the task by painting the aircraft and packing it in a standard 20-foot container for shipment to the USA. After long delays related to Covid, Alberto Porto traveled in early December to Lander, Wyoming to be present during the aircraft inspection by a DAR. Giving his first U.S. bird a careful introduction, Alberto provided ground training with Troy and his flight instructor, John Larsen.

Including his 40 hours of flying in a designated area as is common for all Experimental-Amateur Built aircraft, Troy has now logged about 50 hours in the 48-inch-wide speed machine. His Risen is powered by a turbocharged Rotax 914 as Lander airfield (KLND) has a 5,588 foot field elevation. With this engine, his Risen can handle the density altitude well and can hit 200 knots while boasting a typical cruise of 180 knots. Climb exceeds 1,500 feet per minute.

If you are intrigued by Risen but not sure you want the cost, complexity, or maintenance of a retractable-gear aircraft, Porto Aviation offers a fixed-gear version called Siren. Besides stiff-legged gear, Siren uses a simpler split flap system. 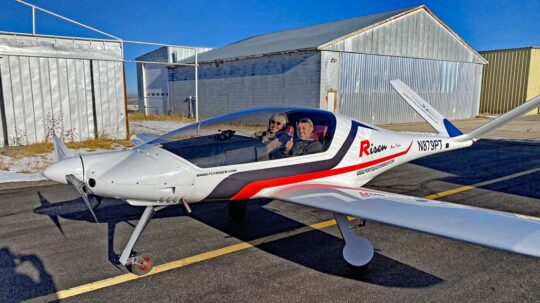 On the same day Porto and van Deursen flew another record: a new all-time high record 378.94 kilometers per hour on a 50-kilometer triangle track.

Staying within European guidelines, the speedy Risen weighed a maximum of 472.5 kilograms (1,042 pounds) and demonstrated stall at less than 65 kilometers per hour or 35 knots). While the Europe-wide EASA now has a 600 kilogram (1,320 pound) class matching international LSA, individual European nations also have the “ultralight” class. In this classification, max weights are 450 kilograms without an emergency airframe parachute or 472.5 kilograms when so equipped; parachutes are mandatory in Germany and other nations accept this safety allowance. 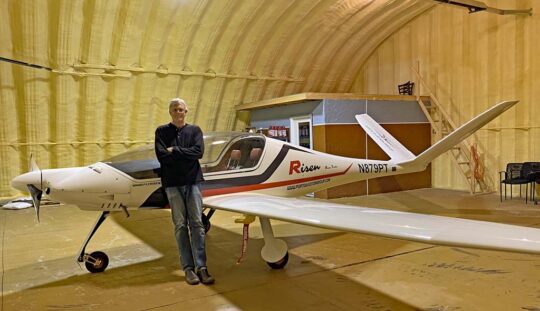 Troy Jones’ Risen is now N-numbered, based in Montana, and free to fly American skies.

Some give-and-take between producers of speedy light aircraft — reported here — prompted Alberto Porto go show his design’s prowess in a more similar comparison. FAI record attempts are done in multiple categories to accommodate aircraft of many types. Of course, rules exist for each of them but rules are sometimes changed or viewed differently by new judges. Rather than getting caught up in rule writing, Alberto vowed to recover his record.

“Can anyone see us claiming that our Risen 914 is now 62.94 kilometers per hour (34 knots) faster than the same Risen 914,” Porto Aviation asked? “Of course not. It’s still exactly the same aircraft, but at different flight conditions.”

This article explains the record-setting task in more detail. For now, suffice it to say that whatever the records body, FAI, says, Troy Jones’ Risen is one of the fastest light planes in the USA. I’ll bet it won’t be the last. 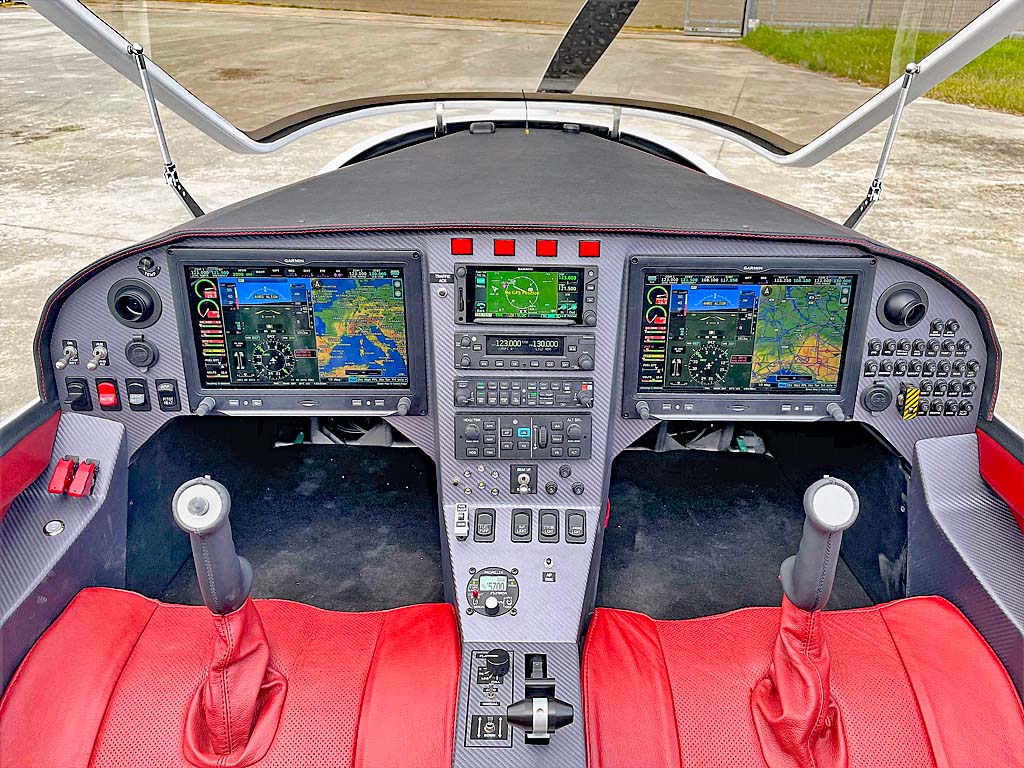 The followings video, recorded at Aero 2015, has been viewed more than 600,000 times. The design was new then but it has continued to attract interest. Designer Alberto Porto shows us around his intense speed machine. The company website changed since the video was uploaded. Go here for more.

A few readers asked if Risen uses flaperons. This image shows the answer and further reveals the air-flow efficiency of Fowler flaps plus the compound shape of the leading edge. 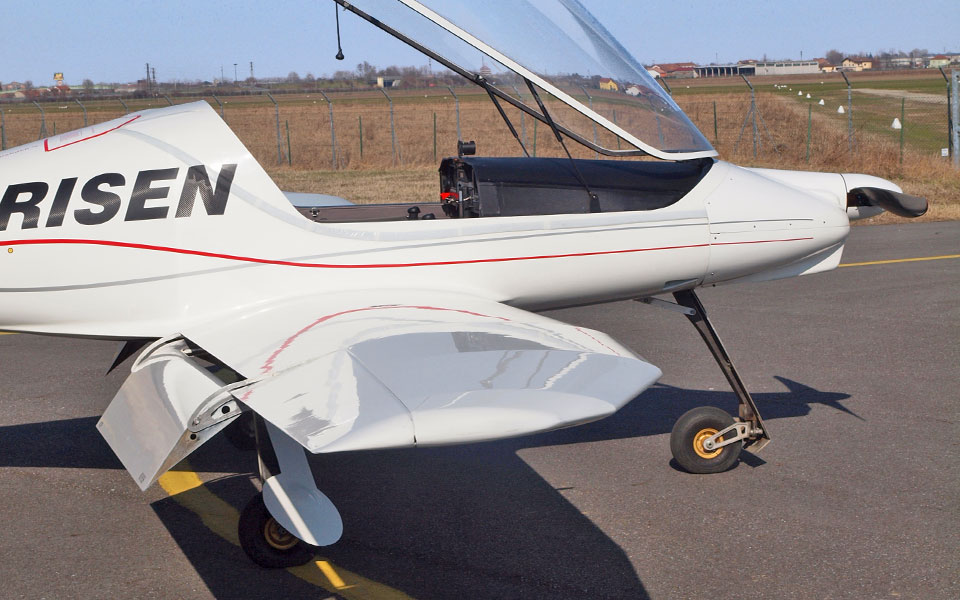