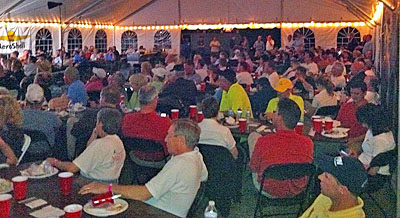 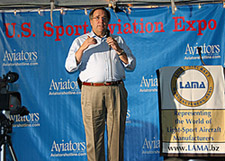 While AirVenture, Sun ‘n Fun, and Germany’s Aero may have more LSA professionals in attendance the LAMA Dinner at the Sebring U.S. Sport Aviation Expo is big. How big? For the last four years, LAMA has “sold out” — standing-room-only last year — its annual dinner. The event takes place in the main, large tent at Sebring. This year it will be the AeroShell tent as that company is generously providing the tent and tables through a sponsorship. Each year LAMA draws 300 or more persons, all industry participants. The dinner is by invitation only. *** This represents the largest gathering of LSA professionals at any show and it is proving to be a major draw. Consider the confirmed list of highly placed officials coming to Sebring 2012: EAA President Rod Hightower will address the LAMA Dinner; GAMA President and CEO Pete Bunce will again lead a joint GAMA/LAMA meeting with LSA businessmen; and AOPA President Craig Fuller will reportedly make an appearance early in the show. Here are three of general aviation’s biggest leaders all showing at Sebring 2012. That’s never happened before. *** In addition, FAA is planning meetings with LSA manufacturers and importers as they have done at previous Sebring events. Along with the chance to speak directly to the association leaders, access to FAA officials is appreciated by the LSA business community. *** One bit of irony given the events of the last few days, an invited speaker to the LAMA Dinner was Randy Babbitt. Due to budget strains, FAA was unable to confirm his visit and now that request appears moot. While not condoning driving under any influences, Administrator Babbitt had been quite supportive of the LSA development and several in the industry lament his sudden departure (which, by the way, adds to the many changes of leadership in aviation as twice reported on ByDanJohnson.com). *** All these occurrences at the Sebring U.S. Sport Aviation Expo, combined with the Expo’s considerable success at filling exhibit spots and gaining sponsors, speaks to the importance of this year-starting show. When Expo Chairman Bob Wood said he would step down after the first seven years of Sebring, many wondered if new director Jana Filip and the Sebring Airport staff could fill Bob’s shoes. Indeed, with Bob still helping (plus a small army of willing volunteers) the Sebring LSA Expo appears poised for even greater growth. That this happens amid general sluggishness throughout aviation is quite remarkable. *** The event runs January 19-22, 2012. Hotels are already filling up and nearly everyone in the LSA field seems to be preparing for the eighth running of the show. Come on down; Florida guarantees no snow and plenty of Light-Sport Aircraft!