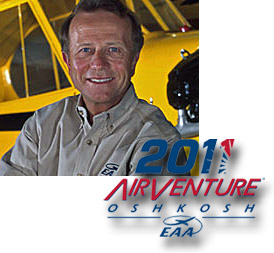 After 22 years, Tom Poberezny suddenly retired as the top man at EAA.

Earlier I wrote about several changes of leadership at LSA producers. Here’s a similar story, one I find quite amazing for its breadth. Consider this… The following organizations — some of the biggest and most influential in aviation — have seen longtime leaders depart: EAA, Sun ‘n Fun, Sebring Expo, and a couple years ago, AOPA. We’re used to frequent leadership changes at FAA, where people seem to move between jobs like a game of musical chairs, but the preceding private organizations had consistent leaders for a decade or more. *** Most recently, Tom Poberezny retired as Chairman of EAA. His departure was abrupt, with a hastily arranged press conference on day two of AirVenture followed by no Tom for the rest of the show he has managed for decades. The decision was speculated to be contentious but regardless of back office maneuvering, it seems a missed opportunity to publicly acknowledge more than a half century of guidance by the founding Poberezny family. Many witnessed the end of the Poberezny dynasty but without any fanfare. Many in the LSA industry feel a debt of gratitude to Tom and Paul Poberezny. *** In stark contrast, AOPA moved from years of Phil Boyer to Craig Fuller with smooth and commendable coordination that celebrated the long and successful service of Phil while extending a warm welcome to Craig. *** Longtime Sun ‘n Fun boss John Burton (a solid friend of the LSA movement) assumed the president’s role for the Florida Air Museum and handed the airshow management baton to John Leenhouts. This appeared very amicable and both experienced men will contribute to the enterprise in Lakeland. In fact, now the central Florida aviation powerhouse has three development legs: the airshow, approaching its 40th birthday; the museum; and a brand new aviation educational institution, the Central Florida Aerospace Academy. *** Sebring U.S. Sport Aviation Expo captain (a retired Colonel, actually), Bob Wood, is very smoothly aiding the transition to new director Jana Filip. He and his deeply-involved wife, Barbara, will continue as volunteers after a period of assisting the new leader. *** In sum, these changes represent a tectonic plate movement in aviation. |||| Our friends at the General Aviation Manufacturers Association recently issued timely comments. GAMA reported sales were down in the first half of 2011 — piston airplane shipments were off 8.7 percent (387 units compared to 424 last year); turboprops declined 8.9 percent and business jet shipments dropped 26.5 percent. *** “These negative shipment numbers demonstrate precisely how ill-timed and potentially destructive the Obama Administration’s rhetoric and policies toward corporate jets are for general aviation,” said GAMA President and CEO Pete Bunce. “This Administration has singled out business aircraft owners with political demagoguery. It is simply astonishing that they cannot connect the dots back to manufacturing jobs and realize they are doing more damage to an industry that has obviously not yet clawed its way out of this recession. Instead of demonizing our industry, President Obama should stand up for general aviation manufacturing jobs.” *** With the economy teetering precariously, many in the Light-Sport sector heartily agree!