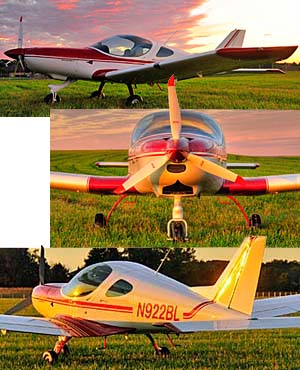 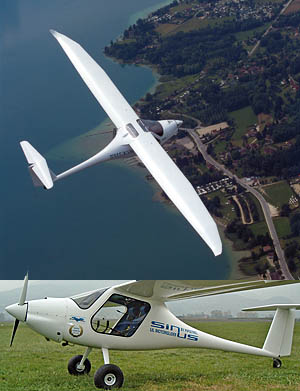 Pipistrel’s latest approval is for their Sinus motorglider. Shown at bottom is the Sinus with tundra tires. photos courtesy Pipistrel 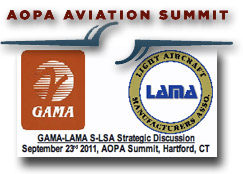 GAMA and LAMA members will meet again at AOPA’s Summit.

Just in time for this year’s AOPA Summit, welcome to a pair of Special Light-Sport Aircraft, numbers 121 and 122: the first, the formerly named NG 5 LSA, rebadged as the Bristell Fastback by importer Liberty Sport Aviation of Pennsylvania; and the second being the fourth approval for Pipistrel, specifically for their Sinus motorglider (previous Pipistrel approvals included the Virus, Virus SW, and Taurus). *** NG 5 LSA was not previously offered in the U.S. though it was sold in Europe as the NG 4 from Roko Aero. When Roko closed its doors production stopped for the NG 4. It became NG 5 as the company reformed into BRM Aero. Changes occur in any industry but Bristell Fastback designer, Milan Bristela, is a steady hand on the joystick known for his foundational work on the SportCruiser (for a year known as the PiperSport) that is presently ranked #2 in U.S. registrations. The Bristell is certainly similar to the SportCruiser/PiperSport though not identical as a close examination at AOPA Summit 2011 will show. |||| Pipistrel is one of those ambitious companies that seems to create new models with ease. Their line is extensive including a weight shift trike, a sailplane (Apis), a self-launched side-by-side motorglider (Taurus), the twin Virus models, plus, now, the Sinus. I first flew the latter as it entered the USA as an Experimental-Exhibition aircraft. Certification rules differ for genuine motorgliders and the company’s U.S. representatives first traveled down that path before achieving no less than four SLSA approvals in the last three months. Pipistrel is only bested by Tecnam‘s five SLSA approvals and is matched only by Jabiru US and ICP/Skykits (which itself is going to new ownership… we commonly see changes in this most dynamic sector of aviation). A regular at air shows, Pipistrel is not on the exhibitor list for AOPA Summit perhaps as they are competing in the NASA Green Challenge, which is scheduled to begin immediately as Summit 2011 ends. Update 9/21/11 PM — See Pipistrel USA’s blog postings about the NASA Green Flight Challenge 2011. |||| Among many other activities at AOPA Summit 2011, GAMA and LAMA will hold the second of a series of strategy meetings with delegates from both LSA and general aviation companies. As LSA further integrate into the broader fleet of aircraft, the general aviation industry is anticipating a rewrite of Part 23 certification rules. While helping LSA to develop and grow into a solid sector of aviation, the “experiment” of industry consensus standards certification offers guidance about how to simplify rules. Put another way, the LSA industry has much to learn but also has fresh experience to offer. *** Kudos to GAMA‘s staff for their foresight in helping to bring the two groups together. The combined group plans to meet about four times per year at major airshows.