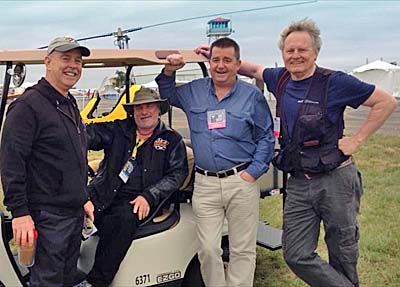 The Airbus E-Fan 2.0 is preparing for production (details in article). 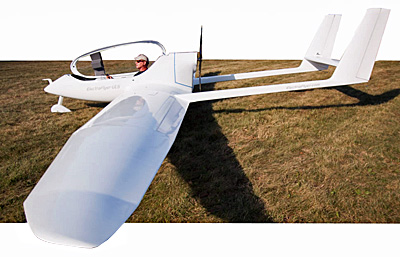 Randall Fishman (in cockpit) developed the lovely ULS reviewed in this video. 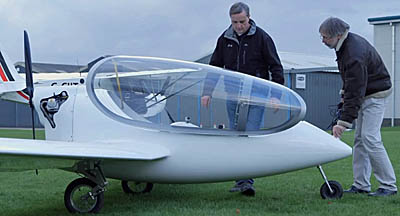 The Cambridge/Boeing hybrid project is also based on the Song, as is ULS.

Recently I had a visit from my longtime friend and fellow aviation journalist, James Lawrence (photo). Among other mutual interests we share a passion for electric aircraft. We’ve each flown early examples and believe we see the future. From the headline above, you might interpret that to mean we anticipate electric airliners. We might … yet we recognize such developments remain distant. Or, do they?

The electric power action today is in very light aircraft — and some are available for you to buy and fly immediately. One example is Zigolo and I’ve reported on eSpyder. The reason is that light aircraft rule is singular: batteries, which weigh too much to allow heavier aircraft any range. The ending video explains why.

Unless you’ve been off-planet for a while, you know the development of improved battery technology is drawing many billions of dollars of investment. Cars, laptops, drones and many more products or industries want better batteries. Many experts believe the green energy push cannot leap forward until better storage, i.e., batteries, is available. While aviation cannot match the massive investments by industry and government, light aviation in particular can benefit from the pursuit by those with deeper pockets.

The deepest pockets in civilian aviation are Boeing and Airbus. Only two years ago, I would have scoffed at any mention that these companies would pursue truly small and light aircraft. Today, I have to shake my head in amazement as both companies put money into small aircraft projects.

Airbus E-Fan As reported earlier Airbus is already flying their E-Fan, an electric two seater that cleverly looks like a mini-bizjet with its twin ducted props. It has been suggested that the two place model could be market-ready by 2017 and a four seater is planned. This was not simply a concept airplane; they planned to produce some, though in Airbus’ billion-dollar world, building a couple hundred airplanes could be little more than a fact-finding experiment.

Since our first report, Airbus said it signed a deal with Daher-Socata to become a major partner with Airbus Group’s VoltAir subsidiary “for the design, development and certification of a new electric airplane … called E-Fan 2.0.” According to the airline company, “E-Fan 2.0 is intended to be a general aviation trainer,” which they claimed will be the “first full-rate production electric aircraft in the world.” Airbus added that one of their goals is to eventually learn more about future Airbus airliners.

Socata will be responsible for the E-Fan 2.0’s entire development, including its electric engine and batteries, flight test and certification by EASA in Europe. The French company manufactures general aviation aircraft and has reportedly freed up its engineering team to focus on the new project. Airbus said E-Fan 2.0 will eventually be sold in the United States as well as international markets. Daher-Socata is well equipped for the work, having produced “more than 700 TBMs as well as thousands more piston GA airplanes under the Rallye and TB lines.”

In their intense battle to sell 737s and 319s, the two giant companies always seem to go head-to-head … so why would it be any different in one or two seat airplanes?

Boeing Hybrid Project Of course, the point of the exercise is technology development and these two companies with thousands of smart engineers on their payrolls undoubtedly realize it is light airplanes that presently offer a valid testbed for electric propulsion ideas. However, Boeing’s approach is different. They teamed up with a group at Cambridge University in England led by Dr. Paul Robertson of the university’s department of engineering. Robertson and a trio of students are working on a hybrid, a Toyota Prius of the air if you like.

The British team acquired a single place Song from Airsport s.r.o. This is the same basic airframe as previously used by Electric Aircraft Corporation‘s Randall Fishman. By my reckoning Randall is one of the pioneers of electric power, having already logged more than 130 hours on his ULS, which is a Song modified for pure electric power; photo. Song is also represented in Canada by Melody Aircraft with gasoline power only as originally designed.

The Cambridge/Boeing aircraft uses a combination of a Honda four-stroke piston engine and an electric motor/generator, coupled through the same drive pulley to spin the propeller. During takeoff and climb, when maximum power is required, the engine and motor work together to power the plane. Once cruising altitude is reached, Robinson said, “The electric motor can be switched into generator mode to recharge the batteries or used in motor-assist mode to minimize fuel consumption. The same principle is at work in a hybrid car.”

In addition to massive corporations like Boeing and Airbus, several other groups are also working on electric power. Even hybrid aircraft projects aren’t new but some combination of these could change aviation, perhaps forever, if Jim Lawrence and I have any idea about it. This should get real interesting real soon and I’ll try to keep you informed.

The following video explains the Cambridge/Boeing project quite succinctly: