Airbus recently showed their all-electric E-Fan at the Farnborough airshow. photo from Inside EVs 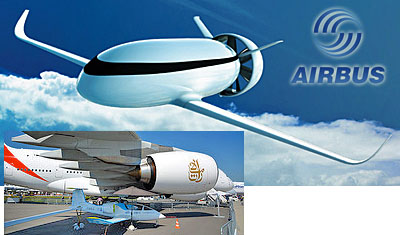 As we all get packing for Oshkosh where we’ll see all manner of aircraft, one of the biggest manufacturers revealed one of the smallest airplanes at another airshow: Farnborough in England, an event dominated by military and airline producers. More surprisingly, Airbus announced at Farnborough that it would put into production their all-electric-powered E-Fan. Big aircraft, the buses of the sky, are good at moving people to their destination. However, they are very noisy and consume oceans of fuel leading to more pollution. Can this situation improve? Is it even reasonable to consider an electric-powered airliners? Some experts scoff at the idea but Airbus’ E-Fan made a powerful, if relatively quiet, statement.

Airbus’ E-fan made its first flight at a French airport near Bordeaux on March 11th this year. The project reportedly evolved from work with the tiniest airplane most AirVenture visitors have seen. Airbus used an electric-powered Cri-Cri as a test bed to develop their battery and energy management technology. E-fan is presently a tandem two seater though Airbus said a production version will have side-by-side seats. The small plane is 22 feet long and has a wingspan of 31 feet and the prototype weighs 1,100 pounds; this sounds rather heavy for a two seater but remember it’s carrying plenty of weight in batteries (Airbus did not specify how much). Two electric motors drive two ducted fans mated to variable-pitch propellers. With a 120-cell lithium polymer battery, E-Fan can fly for one hour with a 15-minute reserve. Powering the motors are a series of 250 volt lithium-ion polymer batteries made by the Korean company, Kokam. Batteries are mounted in the inboard section of the wings (see second video) and can be recharged in one hour, said Airbus. Engineers also installed a backup battery onboard for emergency landings if the main battery power has been consumed.

As the photos show E-Fan has tandem, retractable undercarriage made up of a nosewheel and a larger main gear, something like the original Europa that used a massive single wheel. Airbus engineers designed E-Fan to taxi using electric power. The main wheel is driven via chain from a 6 kW (8 hp) electric motor. The big company said this results in more noise reduction and the powered drive wheel can silently accelerate the plane up to 37 mph. Doing so reduces power drain versus employing the propellers to move around on the ground. E-Fan’s twin electric motors are enough to propel the small airplane to a top speed of 136 mph and a cruise speed, with two people aboard, of about 100 mph.

Airbus plans both two and four-seat versions of E-Fan, called 2.0 and 4.0, which could arrive by 2017. The company said it believes its E-Fan 2.0 can find a market in pilot training. Airbus reportedly plans to build 100 E-Fan test aircraft to gather data for the program. Going even further, Airbus believes electric aircraft will become important in coming years as a way to cut greenhouse-gas emissions from conventional aircraft exhaust and to offer quieter planes. Noise isn’t just an issue for people living near airports; quieter planes could be flown at hours that would unacceptable for noisier conventional airlines so companies could schedule more flights, Airbus noted. They hinted at plans for an all-electric or hybrid 90-seat passenger plane. The European company also thinks it is possible to build an all-electric helicopter.

E-Fan uses ducted fans, which places a fan-type propeller mounted inside a cylindrical shroud, or duct. The duct reduces losses in thrust from the tips of the props although to be effective close tolerances are necessary probably driving up costs. Ducted fans generally use an odd number of shorter blades than convention props allowing them to operate at higher speeds. Using an odd number of blades reduces resonance in the duct. Conventional props tips approach the sound barrier so they are turned at lower speeds which requires more diameter. A shrouded rotor can be as much as 94% efficient, experts say and ducted fans are quieter than conventional propellers because they shield the blade noise and reduce intensity of the tip vortices. Ducted fans can also offer enhanced safety on the ground by protecting people against spinning props. Learn more about ducted fans.

Catch some good closeups, flying footage, and onboard camera views in this YouTube video of the Airbus eFan single seater.

Here is the official Airbus video on the development of E-Fan. If you look very closely, you’ll see some features, for example, a BRS parachute flag, and details about battery placement.