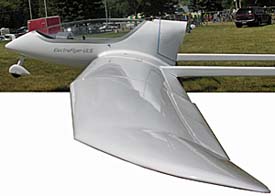 I simply love the shape of the ULS wing. 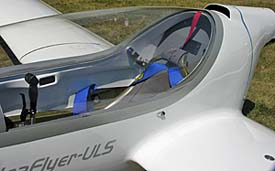 Seating for one in typical sailplane laid-back style. 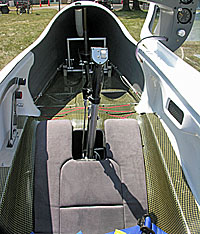 Here’s the pilot’s point of view. Note instruments will swing over with the side-opening canopy.

Randall Fishman virtually invented the electric aircraft. That’s a rather big statement yet I stand behind it. Randall first showed a functional electric trike at Oshkosh 2007. He’s been on a tear ever since and his ULS is his present state-of-the-art, his fourth generation of electric aircraft design.

*** I use three words to describe ULS deliberately. It’s electric. That’s obvious but singular. Fishman’s Electric Aircraft Corporation is presently selling electric powered aircraft. You can also buy an electric eSpyder from Yuneec or an eGull from Earthstar but after that, mostly what you hear about electric aircraft are developments… fascinating but just developments. Electric Aircraft Corporation is ready today.

*** ULS is gorgeous. You can see that for yourself and I have to presume you agree because it is simply beautiful in its sweeping lines, slippery smoothness, and overall elegance. It wowed visitors to Oshkosh 2012 and it’ll do that at any airport I submit.

*** Plus, ULS is freedom. Why? Well, this is a Part 103 vehicle and that means no airworthiness certificate, no N-numbers, no pilot license, no medical, and you can buy it ready to fly. Randall is working with contacts at FAA, he reported, regarding the valuation of batteries as in lieu of gasoline, which ULS does not carry. The battery weights are not insignificant but they’re manageable. Partly this is possible because ULS is a soaring machine at heart (doesn’t it look like sailplanes you’ve seen?) and that means you can elect a small amount of battery power just to launch you and perhaps to get you home after soaring motor off, maybe for hours.

*** It’s worth noting that we are now in the very month 30 years ago when aviation’s simplest and most free sector was given birth. In 1982, FAA passed the ultimate in FARs, a regulation that can be printed on the front and back of one sheet of ordinary office paper. Yes, all of it! Part 103 has now lasted 30 years successfully, even in an era of increasing regulation and Electric Aircraft’s ULS represents a means to show the advanced state of the art of this sector.

*** What about the ULS concept? Randall started with an electric trike… that worked! Call that Generation 1. Then came an electrified Moni motorglider for Gen 2. His “C” model was a sleek two-seat motorglider that we’ll call Gen 3 and it was followed by the Part 103 ULS debuted in 2012. That makes Generation 4 and she’s looking good.

*** A battery pack that slides into the shoulder wing delivers 30 minutes with two packs optional and battery tech is evolving continuously. In other parameters, ULS is a Part 103 so it can’t fly faster than 63 mph at cruise, can’t stall faster than 24 mph, has to have only one seat and must meet a tight empty weight of 254 pounds. The last is where Randall’s negotiation with FAA is vital, to keep the feds from penalizing the batteries as part of the ULS’s empty weight when gasoline is not counted in an ultralight vehicles’s empty weight.

*** Cost is about $60,000, but one look at it tells you this is no ordinary ultralight. Plus that money covers your fuel in a very direct sense. Randall says it costs only $0.75 to “fill up the tanks” with electrical current so your purchase includes plenty of hours aloft at bargain prices. I like it. Who wouldn’t?