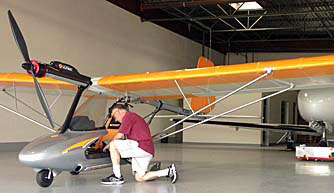 eSpyder and a another aircraft … a great combo for a pilot wishing to learn more about electric aircraft. 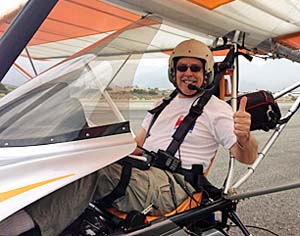 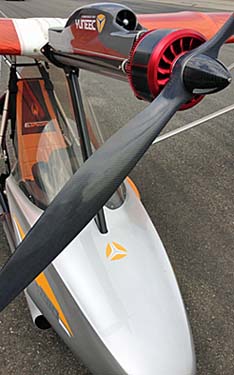 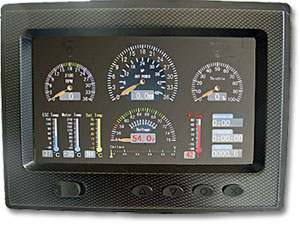 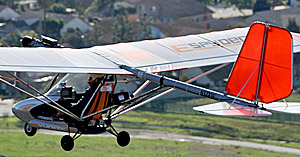 Flying near Cable in Upland California, not far from Ontario airport. photo by Craig Payton 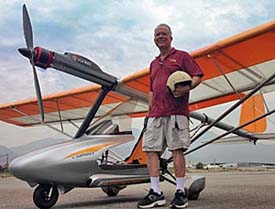 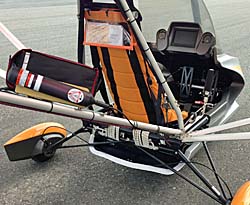 From this view, eSpyder shows its Flightstar heritage, complete with appreciated BRS parachute.

I was a little nervous, I admit. Oh, I wasn’t worried about flying the eSpyder as an airplane. Many years ago I logged plenty of hours in a Flightstar single place ultralight and this was essentially the same airplane. Except it wasn’t identical; this one was powered by an electric motor and it’s funny how that changes everything. Like most of you, I only have experience with gasoline engines (though I have logged many hours of soaring time with no engine whatsoever). So, I have the usual set of knowledge and reflexes about fuel consumption, engine noise, power settings, climb rates … and the sounds of all these things. It’s all different on an electric airplane. Much as I had awaited this opportunity, I found myself apprehensive about the new experience. I’ve had three two-stroke engines go silent on me and I simply didn’t know exactly what to expect from an electric motor. Spoiler alert: I needn’t have worried.

I have access to an electric golf cart. That’s a good place to start as it’s quite similar, in sound and smoothness. Yet as with the golf cart and like many who contemplate buying an electric car — not a hybrid, but a pure, plug-in electric — I found myself taxiing to the runway at Cable Airport in California experiencing what experts call “range anxiety.” How long before the batteries run out and the engine … ‘er, motor, stops? The numbers are all different. Fuel, or better said, energy is measured in volts. I was starting out with full tanks … ‘er, a full charge, at 74 volts. I had a handy checklist strapped to my left leg (see below) and I was trying to wrap my brain around the unfamiliar numbers. A full charge was 74 volts but at 58 volts the motor would shut down thanks to energy management and maintenance software. So, 74 is full and 58 is empty. Power settings refer to a value expressed in KW. I was to climb at 25 KW (about 32 horsepower) for no more than two minutes, although my check-out pilot Tony Settember assured me test pilots had flown eSpyder for an hour with the throttle wide open. Cruise climb is done at 18-20 KW and cruising is done at 10-12 KW. You use a regular throttle, except it feels more like a lever-operated rheostat (a volume knob, basically) with little resistance throughout its range.

So, I realized that the “language” of electric propulsion is different. Like most pilots I’m used to checklists and I willingly paid attention to the one strapped on my left leg. Following is verbatim from the checklist for eSpyder N12XW:

To understand more about eSpyder powered by Yuneec, check out the various power component parts.

eSpyder carries two Lithium-Ion battery packs that weigh about 150 pounds, according to Tony. The airplane has to be certified as Experimental Amateur Built in the USA for now, though Germans and other Europeans can use the new DULV certification to buy a ready-to-fly model. The good news is build time is well under 100 hours; it’s primarily a bolt-together kit. So, save a little and learn more about your new electric airplane. GreenWing will market a fully built aircraft when FAA figures out how they’ll handle these “new” powerplants. You see, when the SP/LSA regulations were issued way back in 2004, FAA didn’t want turbine engines making their way onto LSA, so they specified reciprocating engines only. However, that lack of foresight left out the electric development. ASTM hashed out and finally passed a standard for electric propulsion so the industry is ready. The likeliest outcome is that FAA may issue an exemption. The agency can learn about electric propulsion in this way and hopefully a rule change will later allow electric airplanes. You can read all the eSpyder tech specs and more at GreenWing International’s recently completed website.

Cable airport (KCCB), according to longtime resident and Foothills Flying Club operator Tony Settember, has for decades been a family owned airfield, the largest such public use airport in the world, with some 400 airplanes calling it home. As we drove in, the place seemed surrounded by quarry pits, not the friendliest-looking location to someone who was thinking about engine- … ‘er, motor-out landings. As Tony patiently explained, the area is actually quite accommodating as those big pits have immense wide roads running around them for an easy landing should the need arise. As soon as I went aloft, I saw what he meant and I relaxed into the flight. To begin, I went right around the pattern and made a landing, just to assure myself. With light, gusting winds only a shallow angle off the runway, my landing went well, even though I allowed a bit of drift to carry me off the centerline.

On that second take off after a touch and go, the voltage supply read 60 plus a decimal. Since the checklist shows “Return to field at 62 volts” my concern returned. I forced myself to recall Tony’s excellent briefing when he said not to worry about this, that when you back off full power the voltage would rise again. It did and so I set off for yonder dam, flying a few miles north across several open-pit rock quarries that also function as part of the water percolation system for the area. Sure enough the voltage came back up a bit. Twelve minutes into the flight, the voltage read 66.33 and I kept an eye on it to realize that voltage dropped very slowly. Twenty-five minutes into the flight I still had 64 and a decimal, so I further relaxed my range anxiety.

The little eSpyder was the charming ultralight-type airplane I recalled from my past and I thoroughly enjoyed the flight. I banked around the foothills near the dam and kept pulling the earcup away from my head to easily hear ground traffic while the prop purred at an 11 KW power setting. A low-pitched whine — not remotely like the high-pitch scream of a two-stroke — proved to my ears that the motor was actually working. Otherwise, the near-silence is golden. At a field where no radio communication was necessary, I’d ditch the headset and enjoy that amazing quietness, second only to an unpowered sailplane or hang glider. Yet it was reassuring that with a flick of the throttle, the purring intensified every so slightly and up we went. In all, eSpyder proved an addicting experience. I want more! I think many pilots should experience electric flight and it’s here now, in GreenWing’s eSpyder powered by Yuneec. I hope you can go to Oshkosh and visit the GreenWing gang (main display in spaces 406 & 417 or flying display in Ultralight 938).