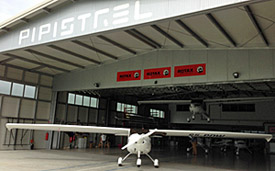 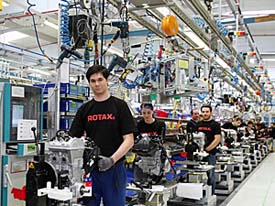 One of several BRP-Powertrain assembly lines. 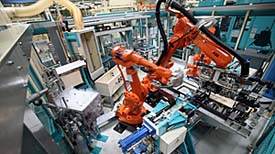 Three robots work in harmony to insert deeply chilled parts, a task challenging for humans and the robots never tire.

Pipistrel’s amazingly energy-efficient factory with several aircraft outside on the company’s airfield.

The shapely wings of Taurus allow soaring flight with 40:1 gliding power. Towering nearby mountains supplied the lift for our visit.

We paid two memorable visits after Aero ended and I’ll tell you a little about each one … but first … While I was at Pipistrel in the office of boss Ivo Boscarol, he received word that Matevz Lenarcic had reached the North Pole on his flight reported earlier. Congratulations on this achievement; a long flight across the North Atlantic remains. Godspeed! ••• The two visits were to Rotax Aircraft Engines and to Pipistrel. These two are not geographically far apart and work closely. Each spoke highly of the other and both companies are highly impressive places to visit.

BRP-Powertrain is the parent behind Rotax Aircraft Engines. Though occupying a sizeable amount of real estate in the immense BRP-Powertrain factory, the aircraft engines are the “hand built” portion of the production. Fast-paced, largely-automated, robot-assisted assembly lines manufacture many thousands of engines each year for such products as SeaDoo, BMW motorcycles, and other well-known brands. Diverse as the two manufacturing systems are, they share many aspects and chief among them is an intensity over quality control. A tour of the entire factory with executive Christian Mundigler became sensory overload. It was obvious that the light aircraft industry benefits enormously from this large Austrian company. Rotax powers an estimated 75-80% of the light aircraft fleet in the USA and even higher in many countries.

The name Rotax stems from “rotary axle,” a simple bicycle part dating to early in the twentieth century. From such a humble beginning, the company has grown to be one of the largest enterprises supplying the aviation industry. Other than Boeing and Airbus, BRP-Powertrain can match metrics with the biggest and best of them. In the factory, a tremendous effort of efficiency is visible in every step of activity. I was impressed with the respect paid to suggestions from the newest employee to the daily manufacturing floor involvement of high level managers. TV documentary producers would love many great visuals from smoothly and continuously running assembly lines to the blurred-motion speed of robots (photos) inserting critical engine components 24 hours a day. The facility literally hums with activity through three back-to-back shifts.

A few hours drive down the motorway in the neighboring country of Slovenia is Pipistrel, the 25-year-old company that produces LSA’s broadest line of all-composite aircraft. It was our first visit to the country formerly known as Yugoslavia and we came away impressed enough to spend an extra day touring the gorgeous countryside. Pipistrel has more than 1,000 aircraft flying in 60 countries. Already well known in the USA, it is poised to move steadily up our market share chart; it would already be in the list but several models are registered as LSA gliders which Jan Fridrich and I have struggled to count accurately for a variety of reasons connected to the FAA database. Along with other undercounted categories as we reported earlier, LSA gliders — as the Pipistrel Sinus motorglider and Virus are often categorized — are an integral part of the Light-Sport Aircraft space and we’re going to dig deeper to report these more fully. Meanwhile, Pipistrel is delivering Alphas as SLSA airplanes and for this they’ve acquired space on an airport in Italy, mere minutes away.

One great pleasure while visiting Pipistrel was getting to fly the Taurus self-launched motorglider and the speedy Virus SW. I’ve already flown the Sinus and Virus but missed the Taurus. This roomy first-of-its kind side-by-side microlight motorglider achieves a 40:1 glide engine off yet launches willingly with push from a Rotax 503 two stroke that neatly folds down into the aft fuselage once aloft. Dual main gear makes Taurus stable in taxi and retract for cleanliness during soaring flight. As my wife Randee and I are both soaring pilots it was wonderful of talented factory pilot Nate to get us both aloft near the tall mountains surrounding the factory. We shared the lift with some paragliders and another sailplane from a club based on the same field as Pipistrel. ••• I plan more complete reports on both Rotax and Pipistrel as their highly competent facilities deserve more than you just read. I am so pleased both are working in the LSA space. Their professionalism contributes greatly to the advancement of light aviation.