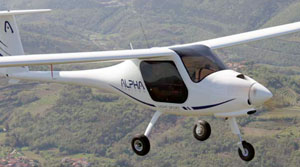 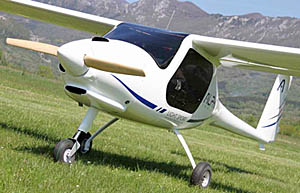 Aimed at economy, Alpha uses the 80-hp Rotax 912 and a two-blade wood prop. 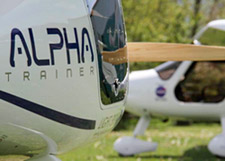 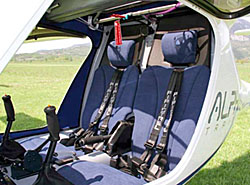 Engineers at Pipistrel must not sleep in too often. This company, which won the NASA efficiency challenge several times — in 2011 taking home a $1.35 million cash prize! — just unveiled a full-size version of a sleek four seat design called the Panthera. Now on the other end of the spectrum comes their Alpha Trainer, a reasonably priced LSA model aimed at the flight instruction market. Their range of models is broad running from powered sailplanes to multiple LSA models.

*** “Pipistrel is proud to announce the successful conclusion of the test flights program and the release of our new aircraft, the Alpha Trainer,” announced the company, which operates production facilities in Slovenia and Italy. Developed as a basic military aircraft trainer at the request of certain countries, Alpha is supplied in nosewheel-only configuration, part of a slate of decisions to hold down the price. Two models were developed; one for the European ultralight market at max weight of 1,040 pounds and another at 1,212 pounds for the LSA market, specifically for nations that accept some version of ASTM standards.

*** Despite having less than 1,320 gross weight, Pipistrel says full fuel payload is an impressive 507 pounds. One way they achieve this is with a smaller central 15 gallon fuel tank. In practice, Pipistrel said this quantity produces a 390 nm range with 30-minute reserve at a cruise speed of 108 knots (124 mph). In a training role the company said, “Alpha uses less than 2.5 gph, effectively giving five hours endurance.” One way to find such fuel economy is by using the 80-hp Rotax 912, which swings a two-blade fixed pitch wood propeller. A lower weight helps to “achieve very short take-off distance and climb rates of over 1000 fpm.” Alpha sports a new wing that is based on the sleek Virus wing though they removed the air brakes to reduce cost and make for simpler controls. Flaperons were also changed to have 25 degrees of flap travel.

*** Alpha lists for €69,000 or just under $90,000 at today’s exchange rates. “Customers have evolved from [those seeking] basic, entry-level aircraft to more sophisticated pilots who require glass-everything with autopilot and many other additions. This is great if you can afford it, but lately the ailing economy mostly does not allow that.” Many Americans would agree and none more than flight schools, which are challenged to find financing able to allow new aircraft purchases. As a result many use vintage Cessna 150s and 172s that are older than their younger students. Alpha could help alter that equation. The European company reports, “We are working with several finance companies and business planners to develop a complete turnkey solution for a start-up training school business.” U.S. representatives can fill in the details of this plan. Before you call, you can download a very complete, 13-page Alpha info PDF with full specs and lots of photos.