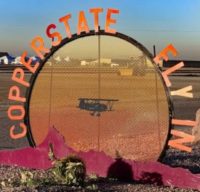 Update 2/17/20 — From a commenter whose handle is “Concerned Citizen” on Videoman Dave’s YouTube channel comes this update on Mike’s flight home:  “Mike left Copperstate Sunday morning and made three legs, stopping in Blythe, Bermuda Dunes, then Banning due to severe winds and rain. After a two-day layover with strong wind gusts, Mike made a hop to Rosamond, then the next day, an incredible dawn-to-dusk day, flying from Rosamond, near Edwards Air Force Base, to Corning, California! …nearly 500 miles and eleven hours in a single day! The little Rotax 447 was flawless the whole trip. Mike. Is. Da. MAN!” —DJ

Most motorcyclists say 900 miles on a bike is a long trip. Seems reasonable. How about when it’s an aerial motorcycle? …out in the breeze, smelling the air, feeling the hot or cool — hmmm, sounds interesting, doesn’t it?

Meet a man who recently made such a flight, over three days, and taking 17 hours of flight time to reach Copperstate 2020 with his legs out in the breeze (pretty true to the motorcycle metaphor, don’t you think?). Mike Jefferson is the pilot and close contact with the air comes pretty easily to him.

He runs Big Air Hang Gliding giving flight instruction and helping people realize a two-person flight. Hang gliding flight instructors call that tandem. It doesn’t mean the same thing as tandem in a powered aircraft (one behind another). In hang gliding, two people must hang from a common point* so they are side-by-side or one atop the other or some variation; the method was called “tandem” and the term stuck.

Taking someone with you in a hang glider demands some level of cooperation from the student. 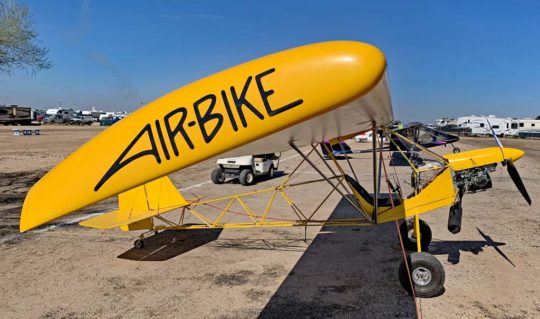 FAA permits two place hang glider for instructional purposes, and believe me, every one going for a flight is going to learn plenty. Still, an instructor needs to know his or her student and preflight coaching is essential. To achieve a perfect safety record, Mike has clearly set some proper techniques to work for him.

Check this figure — Over his years in business, Mike reports taking more than 5,000 tandem flights from hills around San Francisco. For comparison, imagine giving 5,000 Young Eagle flights. In that context, 5,000 becomes a very big number. You can do your own math on how long it takes to achieve that. 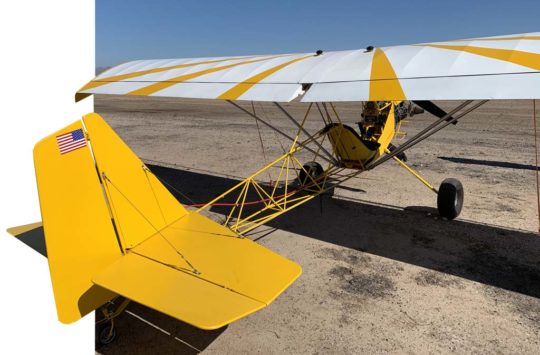 Each of Mike’s tandem flights isn’t walking out on the airport ramp and hopping in a plane for an hour. Coaching, driving up to the launch site, setting up the glider, launching into flight, and retrieving from landing consumes much more than an hour even if the flight itself may be short. Doing this thousands of times with excellent success speaks to using best practices.

So, Mike comes to flying AirBike via a different path than most (though, ironically, your author also flew hang gliders extensively some years before flying AirBike). Mike got his powered aircraft training from Bobby Bailey, iconic designer of the Dragonfly tug that was specially created to tow hang gliders. Many are in regular airborne tractor duty around the USA and the world.

In the last year, Mike discovered his AirBike. Needing some care, he took the project and went over the whole aircraft. I know he did well as I brought Scott Severen over to look at it. Scott has developed AirBike back in the early 1990s while he was president of TEAM Aircraft. Scott examined Mike’s AirBike as well as possible in the field and gave a thumbs up. 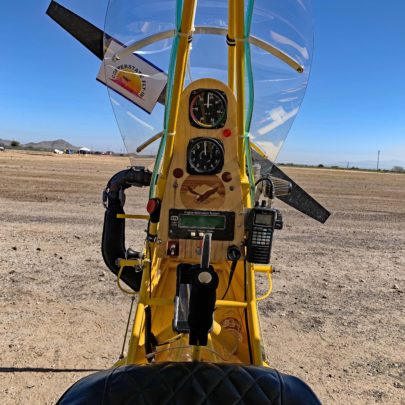 Look at that cockpit view (a different angle shows in the video). What more could you need?

The stories we media types tend to follow, well in my case at least, focus on airplanes and the hardware of flight. Of course, people are behind every product but pilots seem to like the nuts and bolts of the story.

Every now again, when the story is good, it’s fun to talk about somebody doing something interesting in aviation. Mike Jefferson did that with an AirBike journey that probably averaged a shade over 50 mph.

As I write these words, he’s still probably making his way home.

* A common hang point where the payload is suspended is part of the whole stability system of a modern flying wing hang glider. Two persons outweigh the glider by 3X or more. In case you haven’t kept up, modern hang gliders enjoy an admirable safety record recognized by FAA.