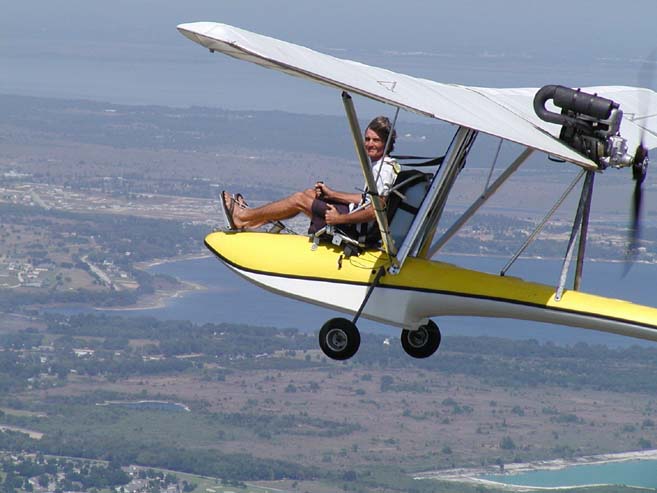 Many pilots are aware of aircraft referred to as flying boats. Among ultralight aircraft, the Aventura, SeaRey and Buccaneer stand out as good examples as do trikes like Polaris’ Flying Inflatable Boat. The flying boat reference describes those aircraft built around a boat hull with substantially different structure than airplanes equipped with two floats.

That clear definition is blurred by the introduction of a novel new ultralight from the inventive mind of Bobbie Bailey. His new Connie amphibian is neither flying boat nor a float-equipped ultralight. My BRS associate, Gregg Ellsworth, tagged it a “flying float.” Works for me. 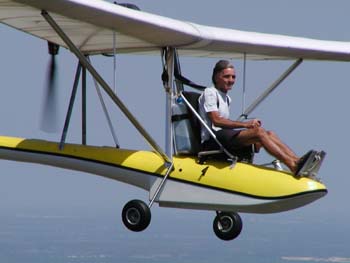 Canada’s Lotus Float company offers a single float setup that functions much the same way but is an add-on to a wheeled ultralight. This may make a perfectly fine floatplane, but you have to do the fitting yourself, and it simply won’t be as elegant as Bailey’s Connie amphib.

To many interested in aircraft preservation, the term Connie means the Lockheed Constellation, that once-futuristic airliner with a gently curved fuselage and triple rudders that lend a distinctive shape to the four-radial-piston-engine transport. Though I fondly recall flying in one of these as a youngster, it’s hardly a topic for my “Light Stuff” column.

But Connie is. Here’s a lightweight machine that can qualify under Part 103 ultralight regulations and that makes it worthy of inclusion here just as it may endear the new ultralight to those who appreciate the lightest of FAA definitions.

Connie is Bailey’s wife, and her name now christens the latest in a line of intriguing aircraft from this Florida designer. 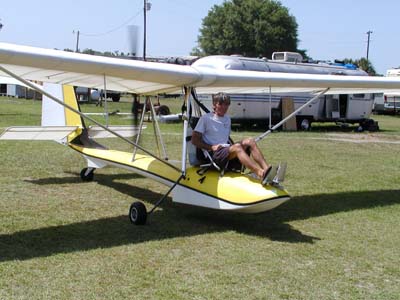 The flying float can be a True 103 ultralight under the defining Advisory Circular 103-7, which helps FAA field personnel determine if a given aircraft fits the ultralight reg. AC 103-7 isn’t itself law but it works the same by clarifying what is and what isn’t a Part 103 ultralight vehicle.

Under 103-7, ultralight designers may add 30 pounds for each of two floats or 30 pounds if the ultralight uses a boat hull. An additional 10 pounds are permitted for each tip sponson, so the Connie may weigh 254 pounds (base empty weight) plus 30 for the hull plus 20 for twin sponsons for a grand total of 304 pounds.

The Advisory Circular also allows 24 pounds for an emergency parachute, so Bailey’s flying float can tip the scales as much as 328 pounds and remain within the guidelines of FAR 103. The Connie amphibian has been BRS-equipped, but it was removed for some other work before I showed up, camera in hand. 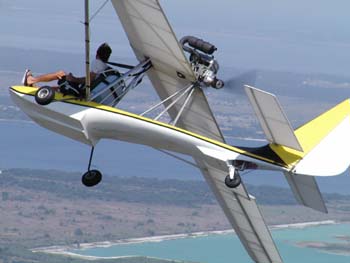 Presently in prototype form, Connie could come in under the weight limit, which means an owner can gain all the benefits of Part 103 including buying a ready-to-fly ultralight that needs no license and no medical to operate legally. In a time when many still believe (wrongly) that you can hardly find a True 103 ultralight, this should sound delightful.

“Someone gave me a Cosmos trike float and I decided to build an aircraft around it,” reports Bailey, who used the float as the primary structural component. Next, he added a modified version of his Tempest ultralight sailplane wing, a few pieces of strategically located tubing, and a spare Rotax 447. This is how a float became an aircraft-one that appears to interest a wide swath of the fly-for-fun crowd. 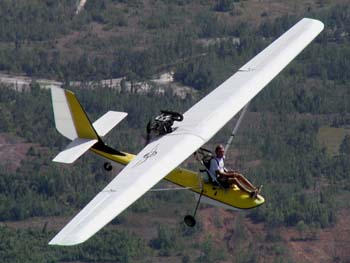 Connie is a true amphibian with wheels that retract. True to Bailey’s minimalist reputation, the gear is raised with a simple lever that lifts the main gear aft out of the water spray and pulls the tailwheel up inside the float body. The handle is then secured under a hook; one is mounted on each side.

Photos with this story don’t show the sponsons that Bailey placed way out toward the wingtip of the flying float. They use a lone strut for support, but Bailey assures, “It’s a nylon rod with more than enough strength to do the job.” The result is a cleaner look than a series of tubes commonly used by ultralight flying boat designers. 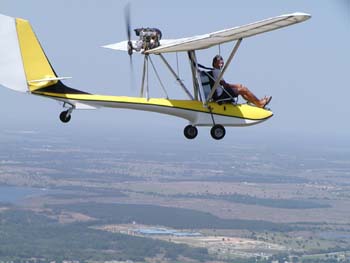 Most important among the efforts needed to bring the Connie to market are water exercises. “I’ve floated the amphibian,” says Bailey, “but I haven’t done takeoffs or landings yet.” He confirmed that these trials were scheduled for early May 2001. My examination of the ultralight came in mid-April after Sun ‘n Fun was over.

Only a few refinements are pending for the flying float. One change will scrap the currently retractable tailwheel for a fixed one that may incorporate a water rudder to aid water taxiing.

The production version will feature a molded-in seat that can get wet, and Bailey will extend the float by about 18 inches for better support in water operations.

Connie isn’t ready yet, but Bailey has a long history of making dreams come true. He once worked with Advanced Aviation and was instrumental in the development of the highly successful Buccaneer flying boat ultralight. Later Bailey developed an ultralight tug called the Dragonfly, which has virtually transformed modern hang gliding. In his spare time, he created the Tempest ultralight sailplane.

Bailey plans to offer the Connie with two interchangeable wings. One, as shown in photos, is a cruising wing with more speed. A larger wing will use the Hershey bar shape and will optimize flights around the lake with lower cruise and stall speeds.

I declined a flight until Connie is more refined. There’s no point to writing about changes that are sure to come in the final version. But once it’s ready, I’ll be on it faster than you can say “amphibian.”